END_OF_DOCUMENT_TOKEN_TO_BE_REPLACED

Oh Christmas cards. Where do we start? Ok, let me just say that I love getting cards. I love sending cards. But deciding on what card to go with and getting the pictures for it always turns into some sort of adventure. An adventure that ever since A started walking we’ve just rolled with and made it into a time of making memories.

Looking back and reminding myself about what I learned from taking pictures with a little one now takes on another perspective when we have not only one toddler walking around, but two. How do people do it with more than that?!
Would I like a card where everyone is looking and smiling, sure why not. But in my case, that just isn’t reality, and I’m ok with that because I happen to love a good candid. So instead of spending hours on trying to get that perfect shot and going back multiple times for a second attempt (that thought did cross my mind for a second) we just work with what we got. This first picture is the closest we got. It’s not bad by any means, but there’s a few stink faces going on. 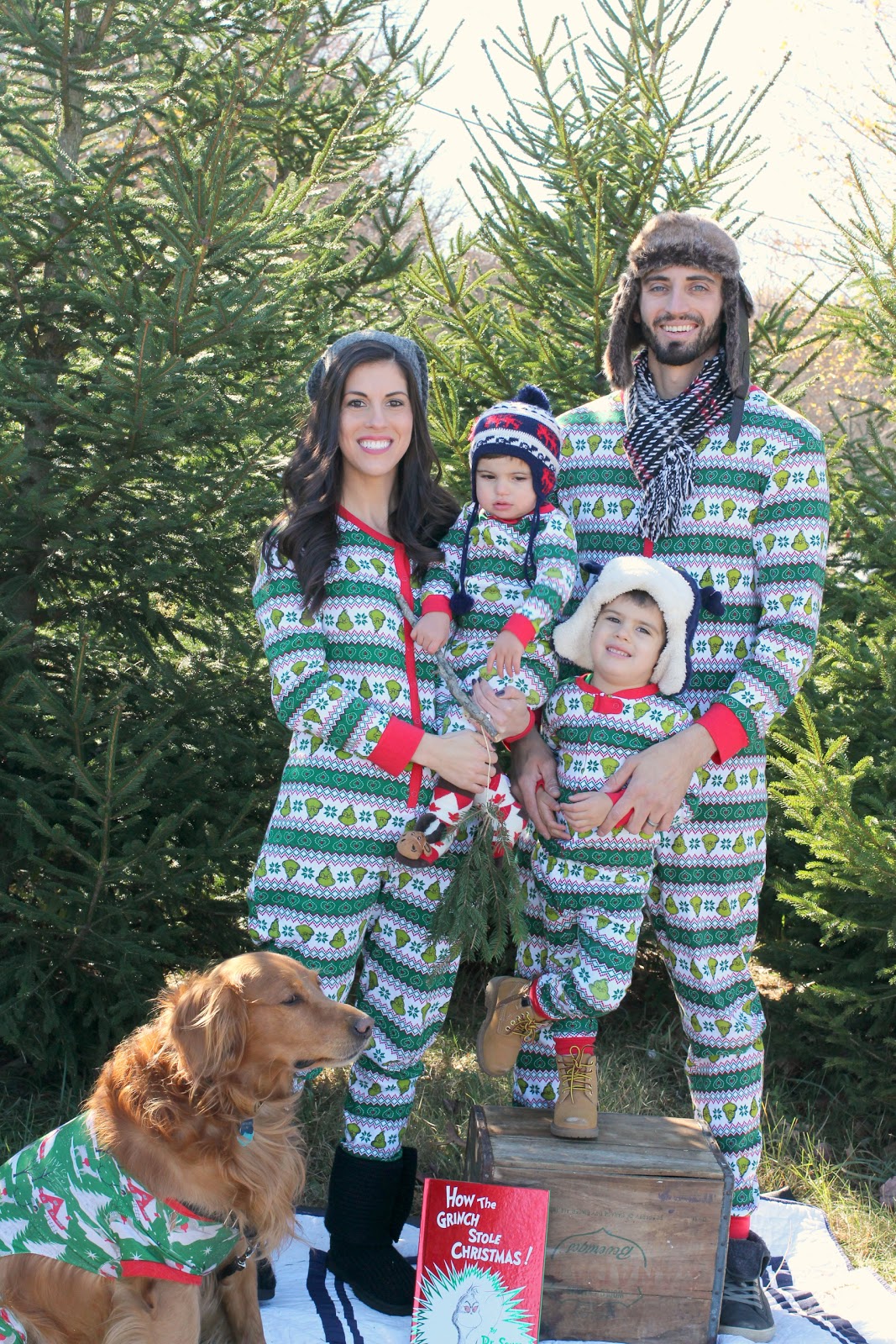 So here’s what our day looked like. I had this idea of doing matching family pajamas and going out to a tree farm to capture our moments. That all went as planed minus the harsh lighting. Nap time and shorter day light just didn’t work in our favor this year.
We set our stuff up, tickled the kids a little, and got them in what we thought was a happy mood. Then all of the sudden the camera clicks on to start taking pictures and they wanted nothing to do with looking at it. There were funny noises being made, even some bribing going on, but nothing. Instead, they started messing around with each other and little nugget turned into the grinch himself. He just wasn’t having it. 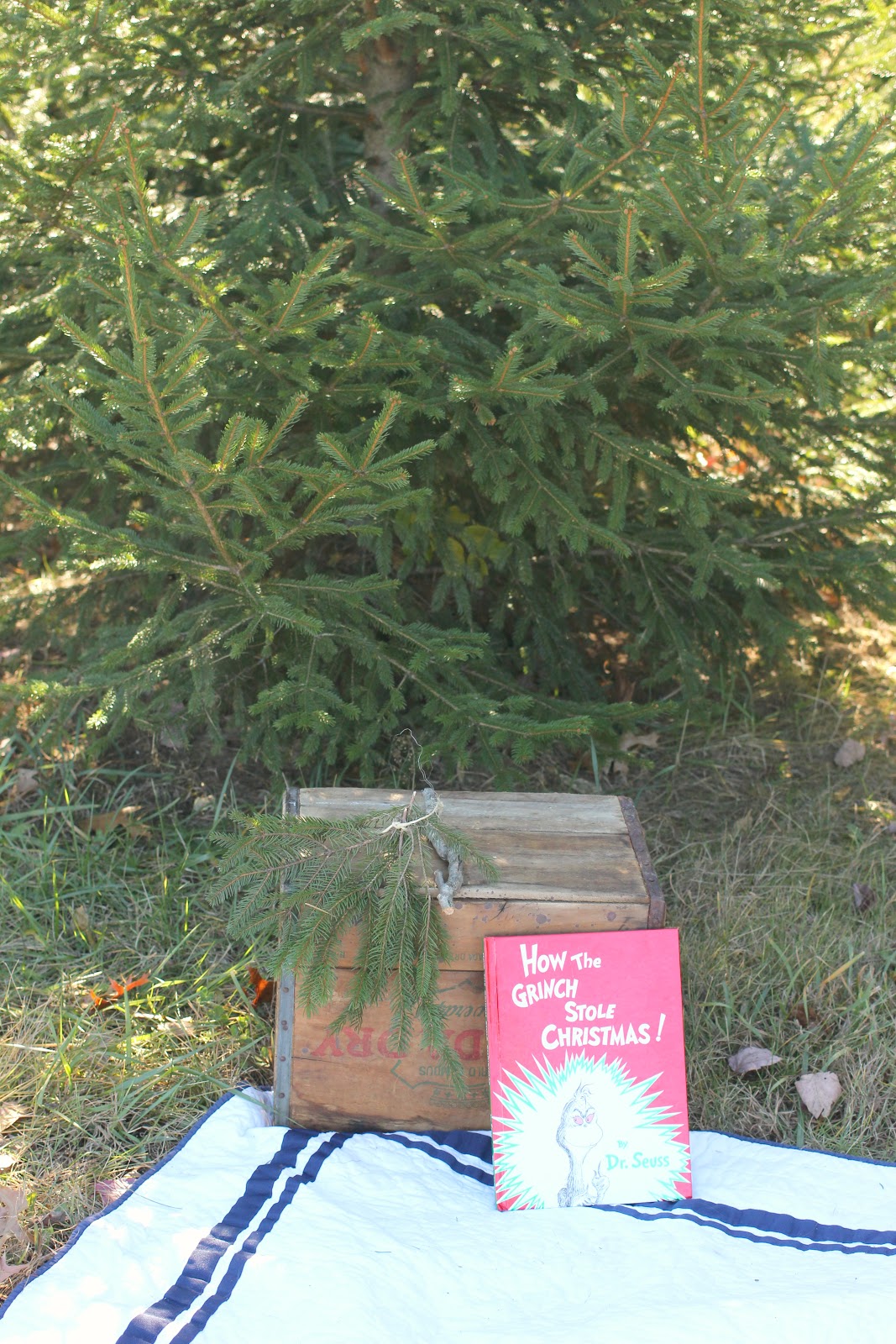 Now I know we were probably asking for a lot with the boys, and us, and throwing our dog into the mix, but not including all of us on our card just doesn’t feel right.
At one point we let the nuggets take a break to run around and Coaty was just sitting there like I’m not done taking pictures yet. I really wish I knew what he was thinking because if I had to caption this I think it would be, let them act like fools while I enjoy this lighting.

I’m telling you, I swear he likes getting his picture taken. In half of the ones where we aren’t looking, he’s like if you guys aren’t smiling I will 🙂 He really is the best and I love that he enjoys getting dressed up and participating in all our craziness. He really is so perfect for our family and will always be my first boy. 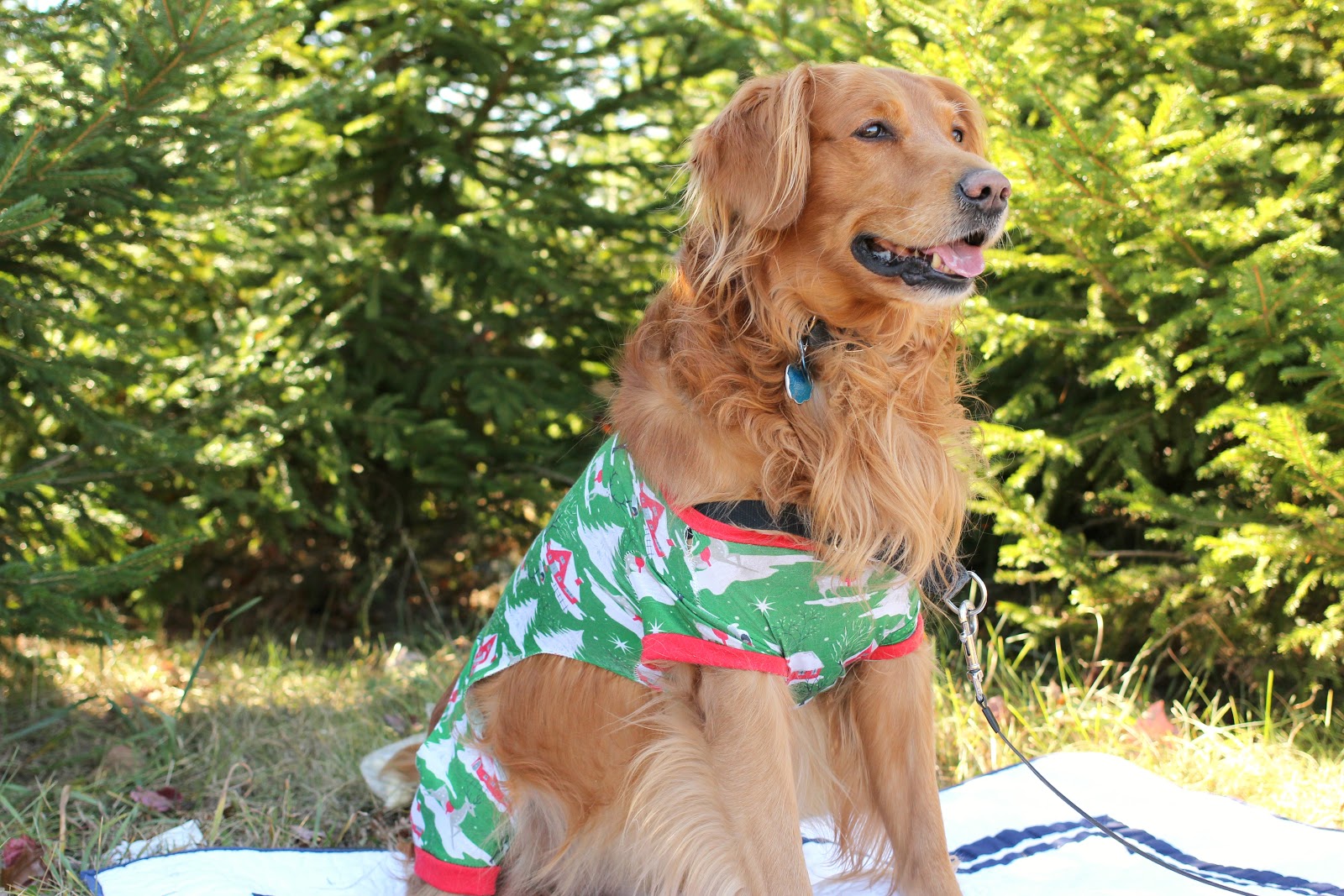 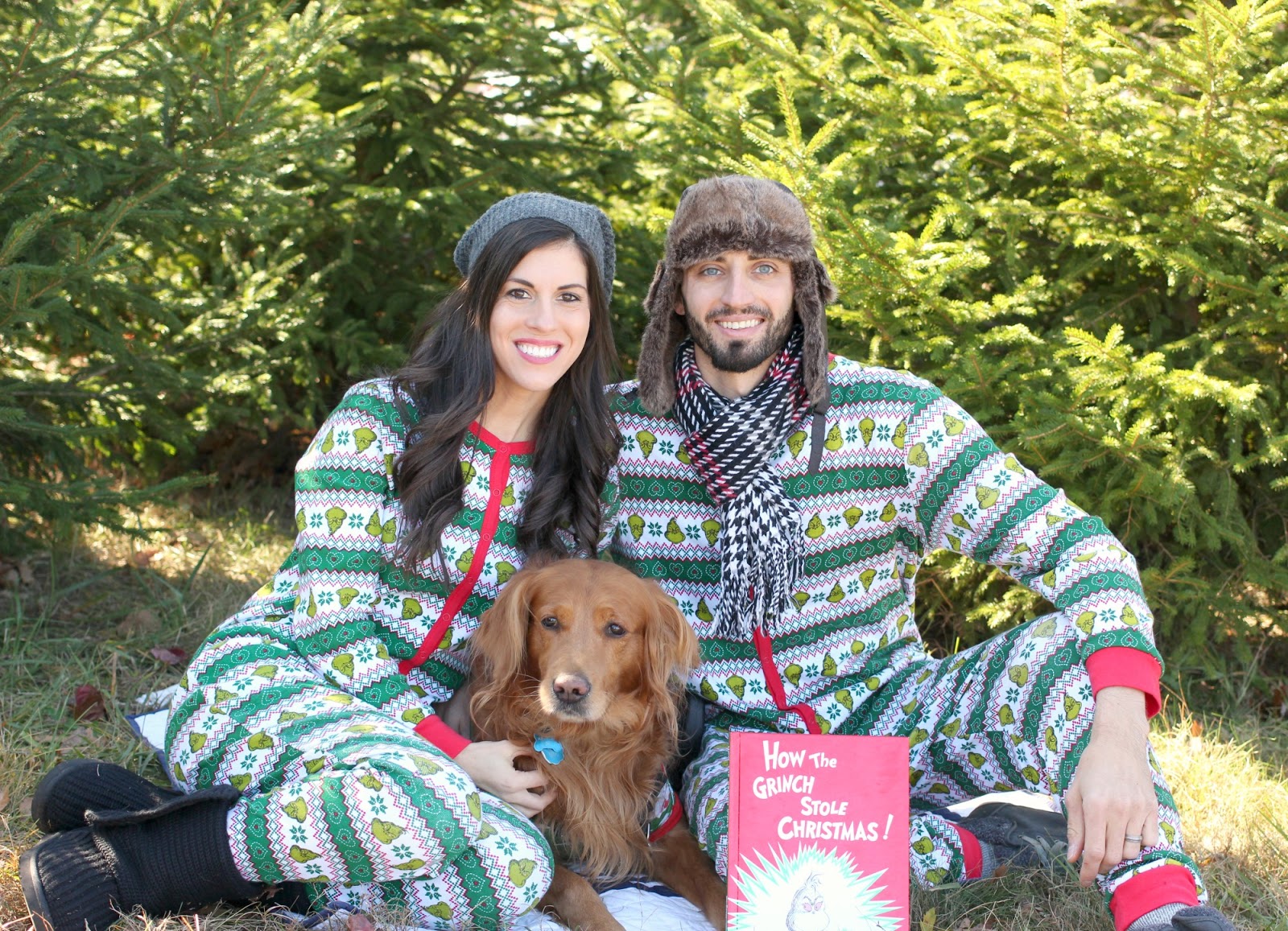 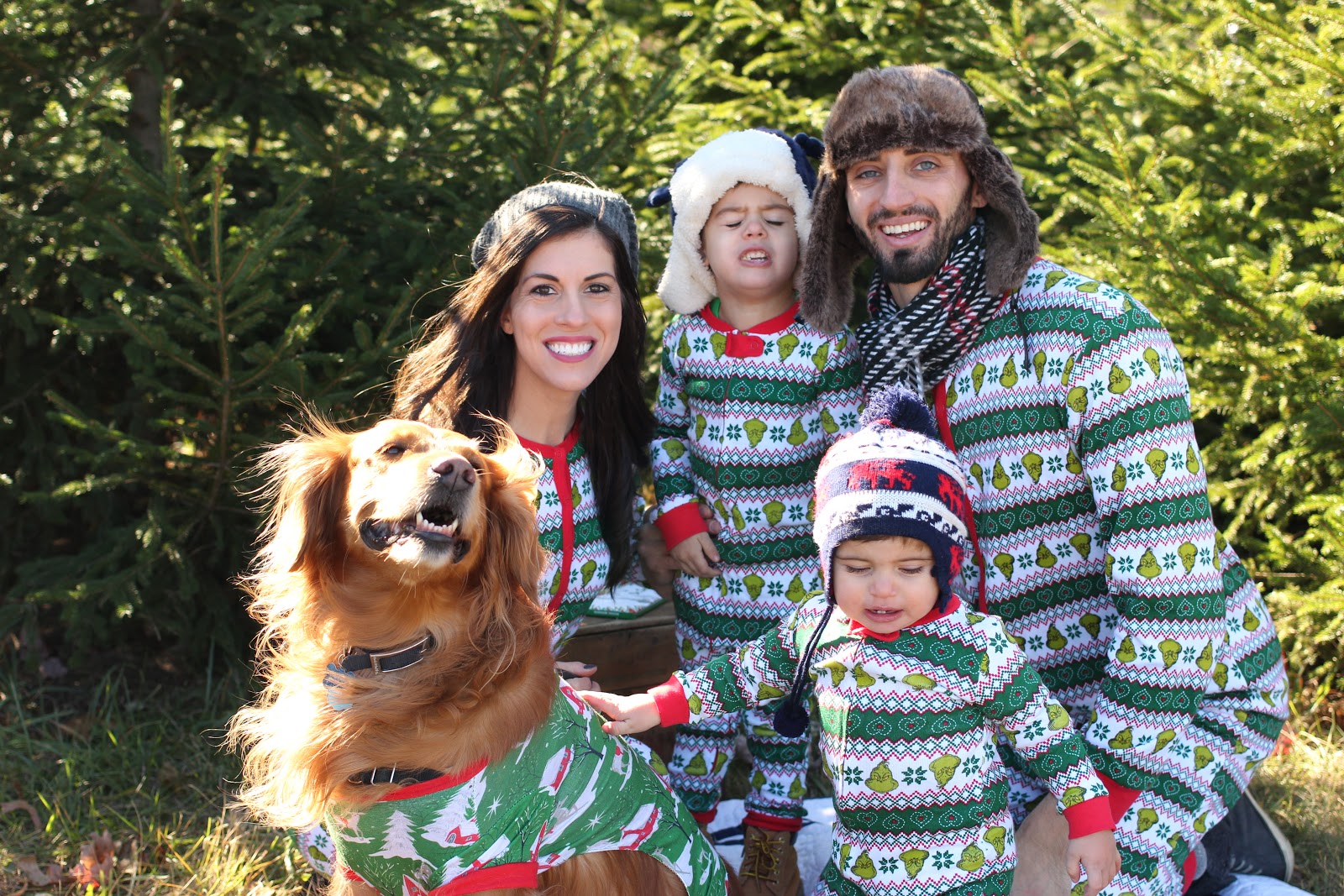 After the boys took a break (which may or may not have been a good idea) we tried taking a few more. We decided to just read them a story and pretend like no one was there and see what happens. That lasted for all of about three pages and then they wanted to read the book on their own. 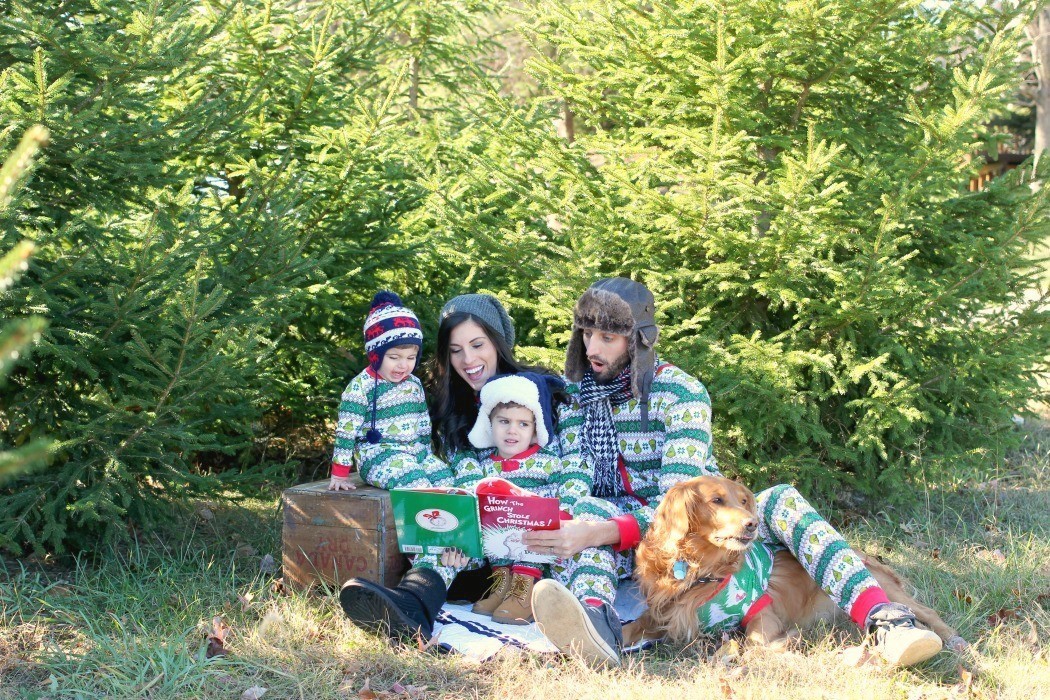 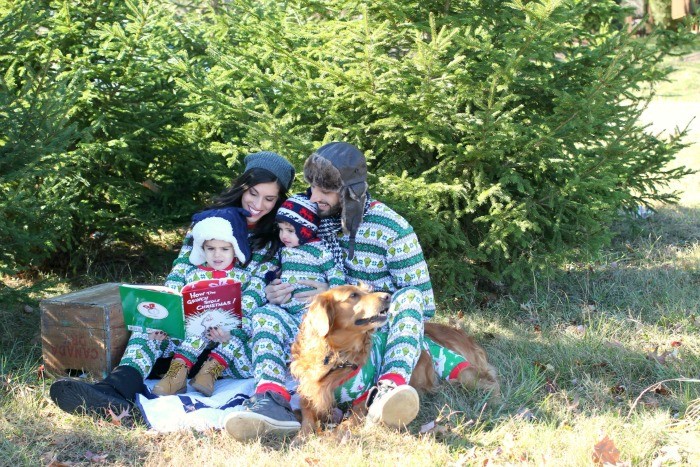 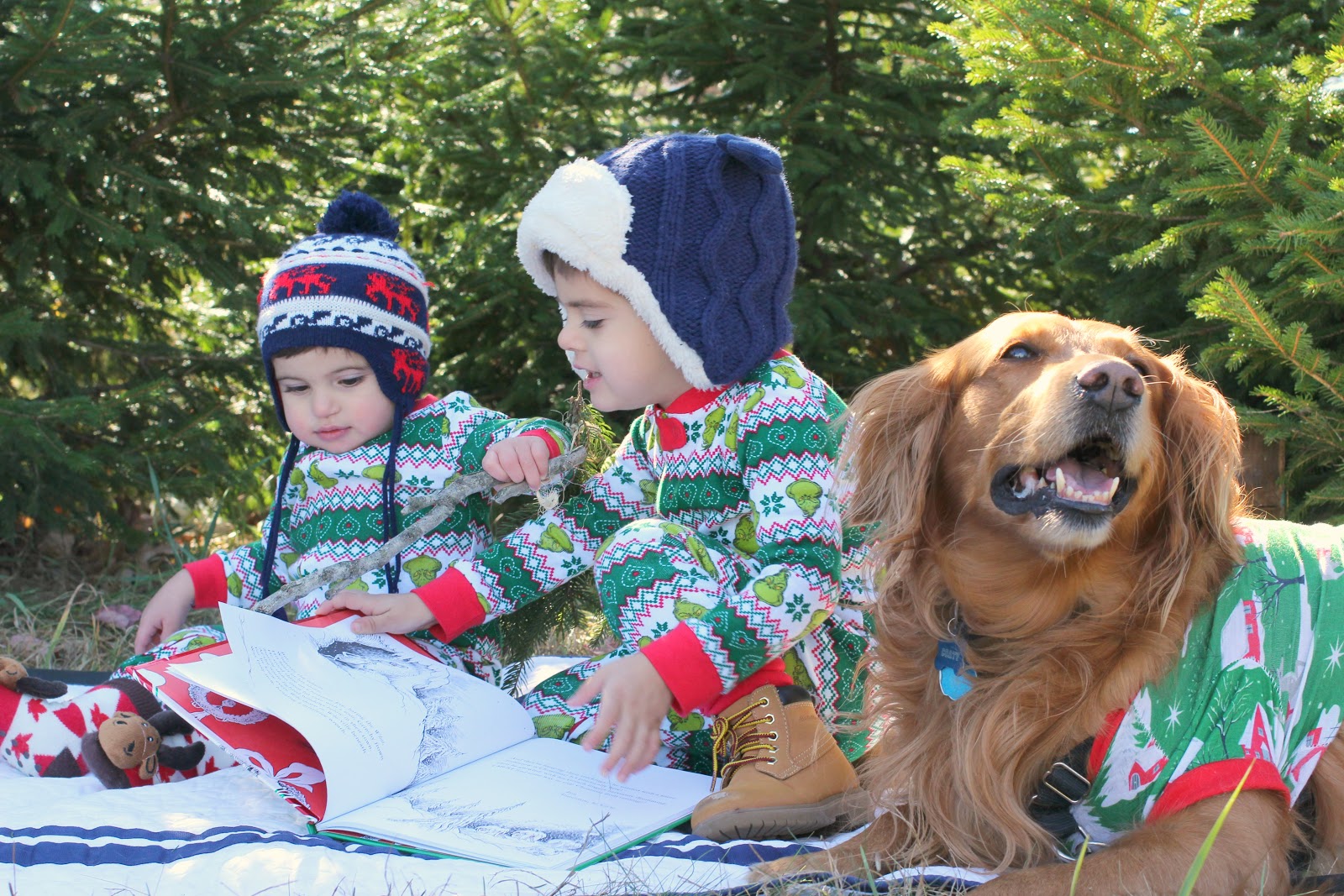 I set little nugget down for a minute to help A fix his hat and boy did he lose it! I couldn’t help but grab the camera and take a few pictures of him screaming. I’m actually happy I did because this is seriously my favorite picture and made our whole card. 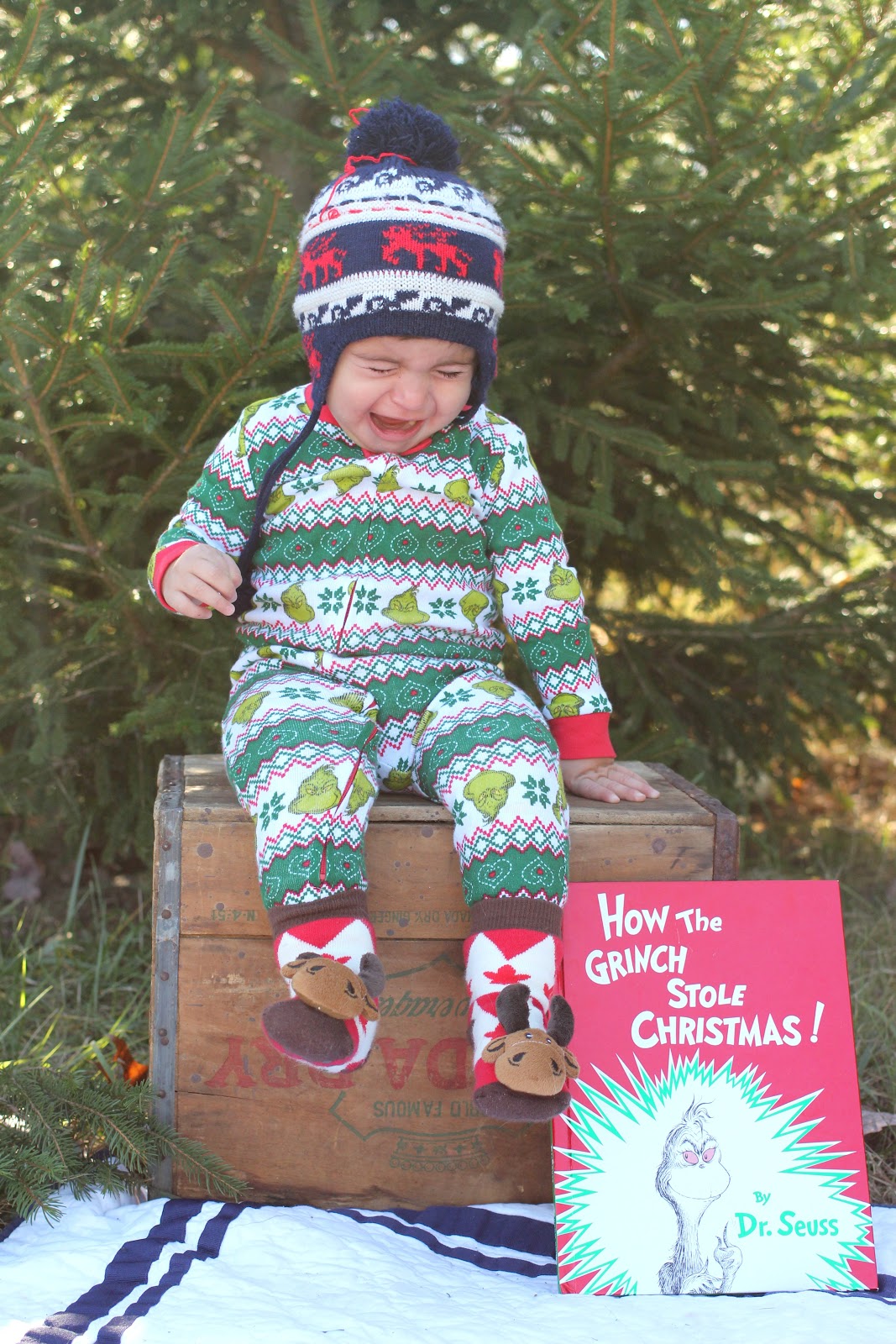 I had this idea of holding up mistletoe and all of us kissing one another but sometimes ideas play out so much better in my head than in real life. Womp womp, green mistletoe up against green trees looks like we’re just waving a stick around. Fetch, coaty!

Then to make matters more interesting it started getting really windy and I couldn’t keep my hair in place. This next pic isn’t so bad but everyone sitting still didn’t last long. The nuggets started acting up and then A took little nuggets pom pom from his hat and stuck it in his mouth! Not cool buddy. My husband’s reaction to how things were going says it all and that’s when we decided to call it quits. 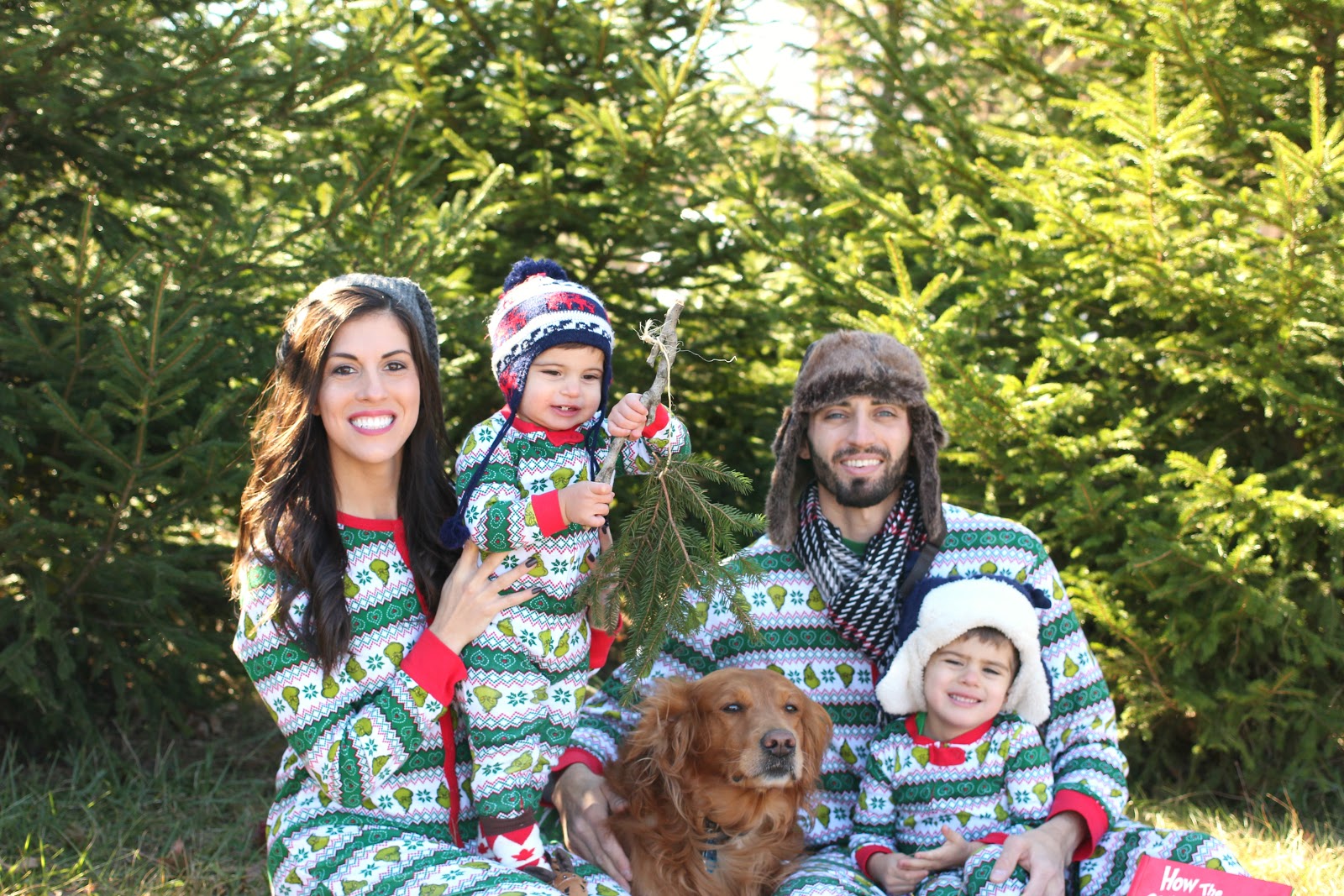 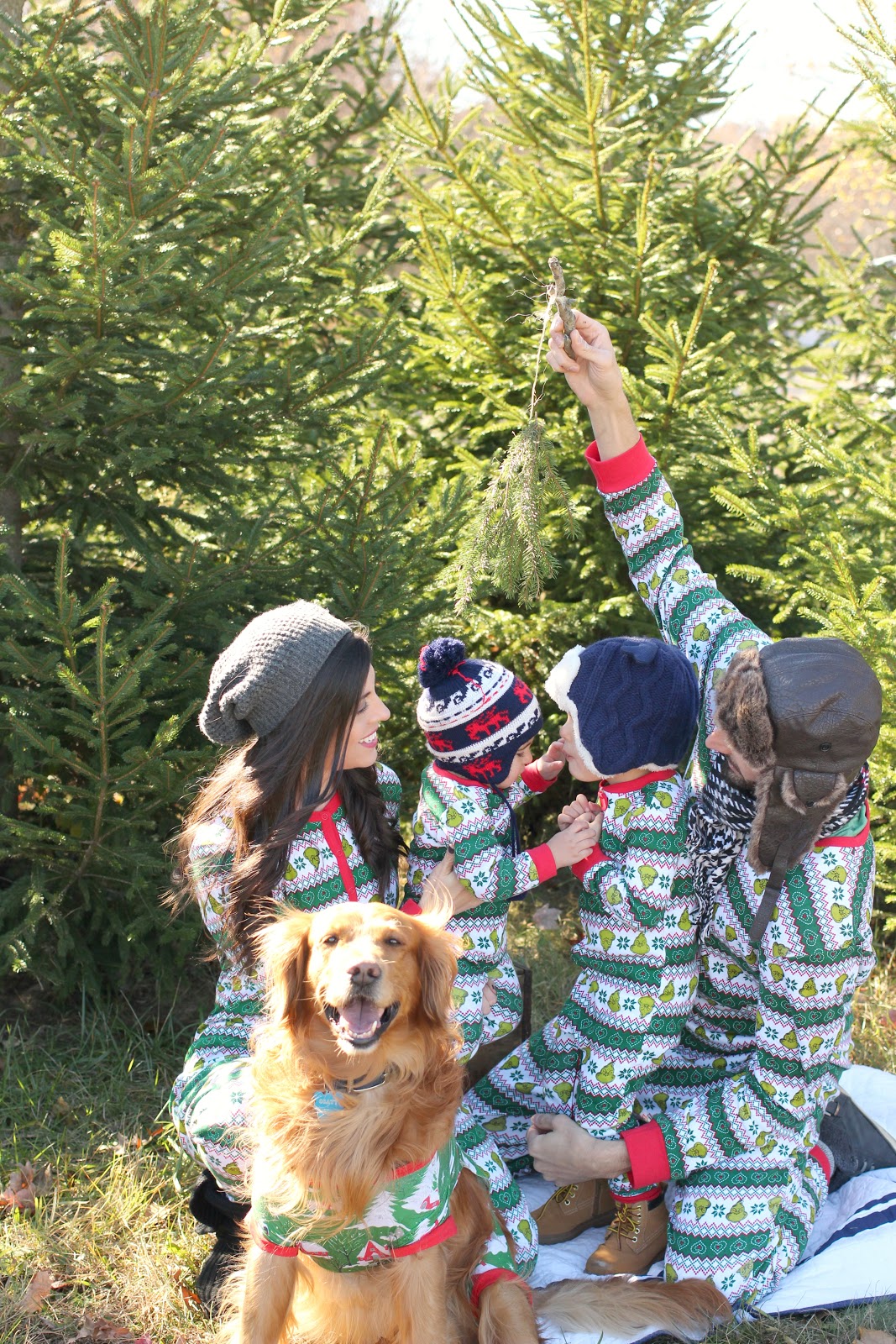 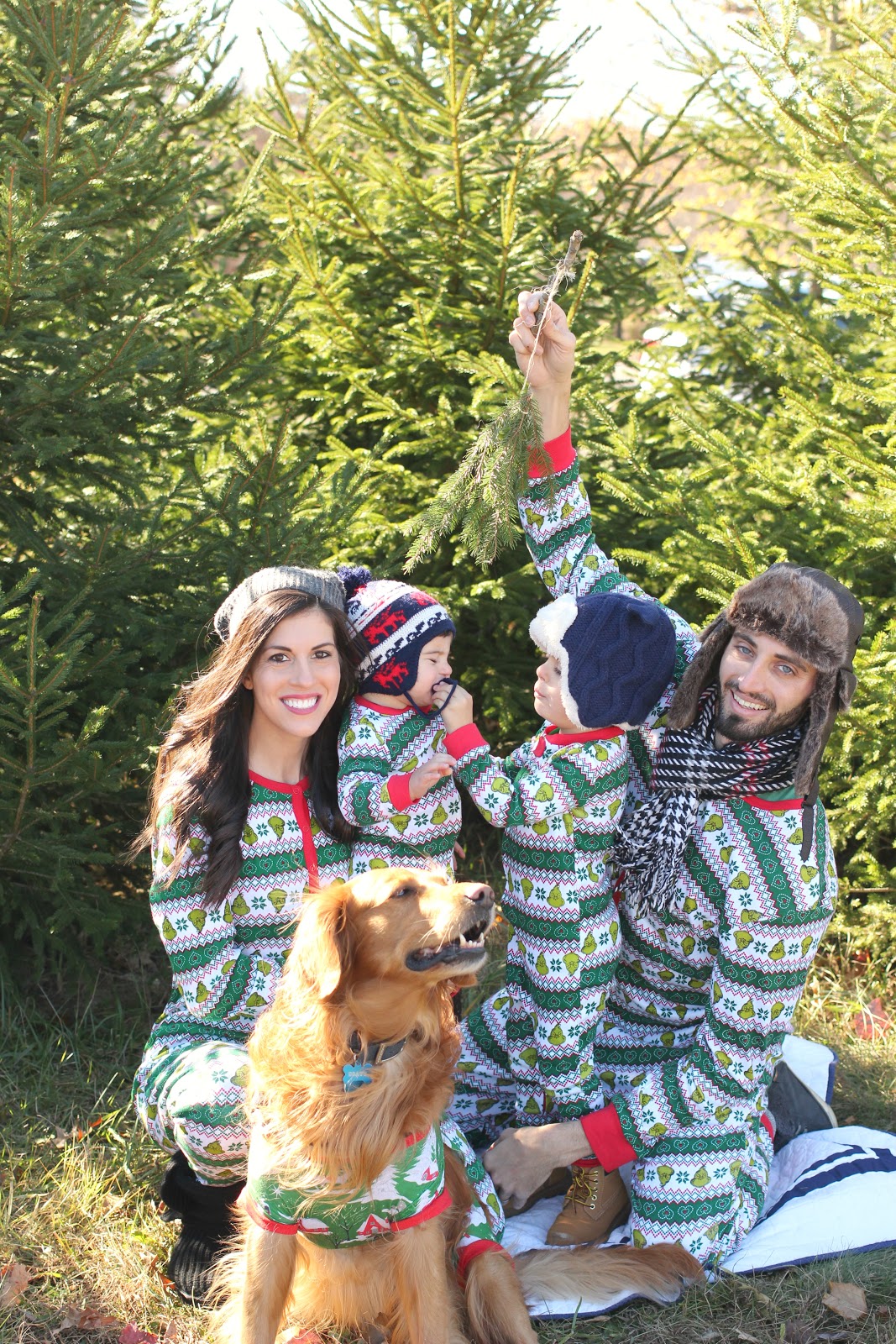 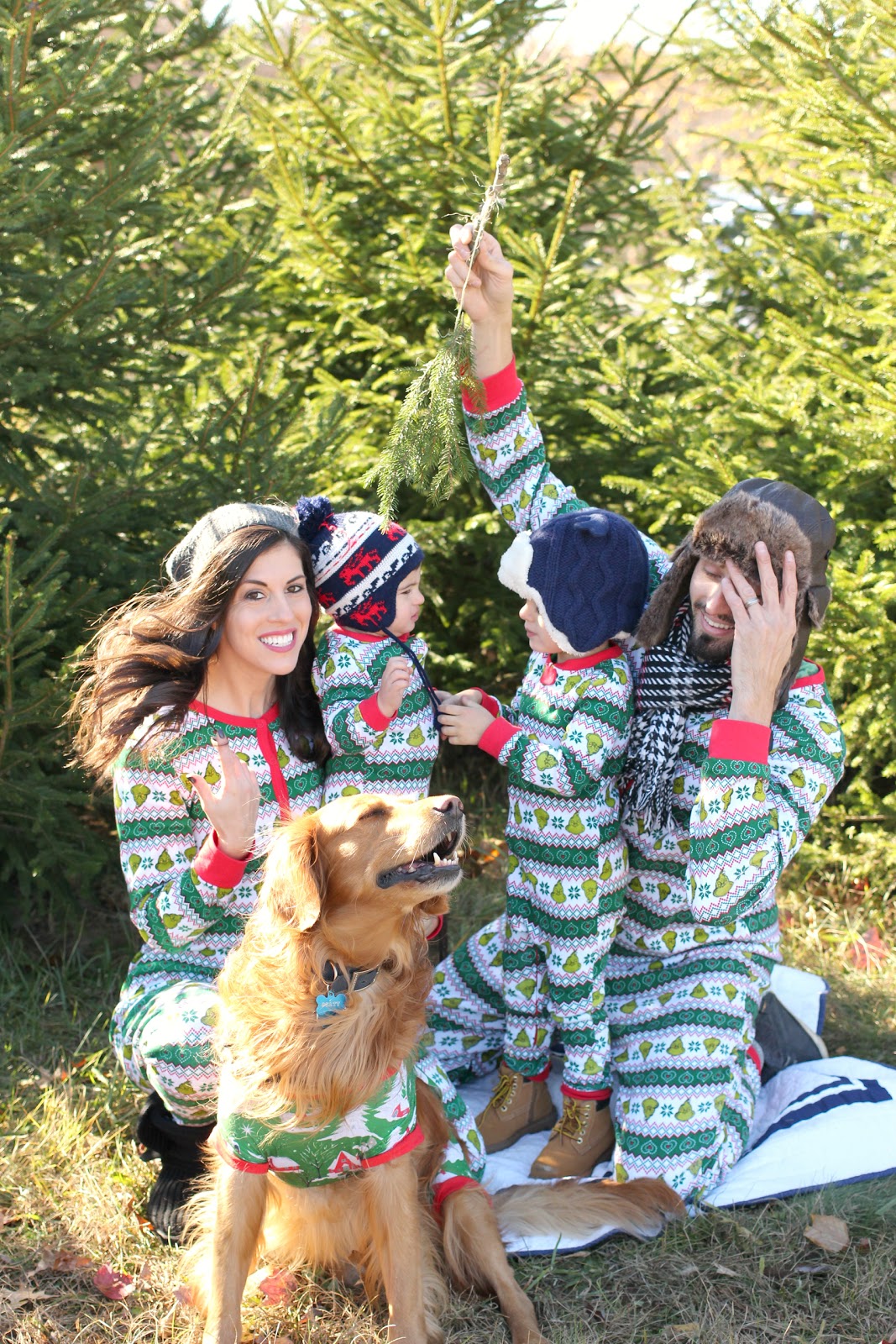 Even though we might not have gotten what in our minds would have been the perfect picture we sure did get some good ones along with a lot of laughs and stories behind them. We decided to go with a funnier card and I think the saying Oh What Fun describes our day just perfectly. 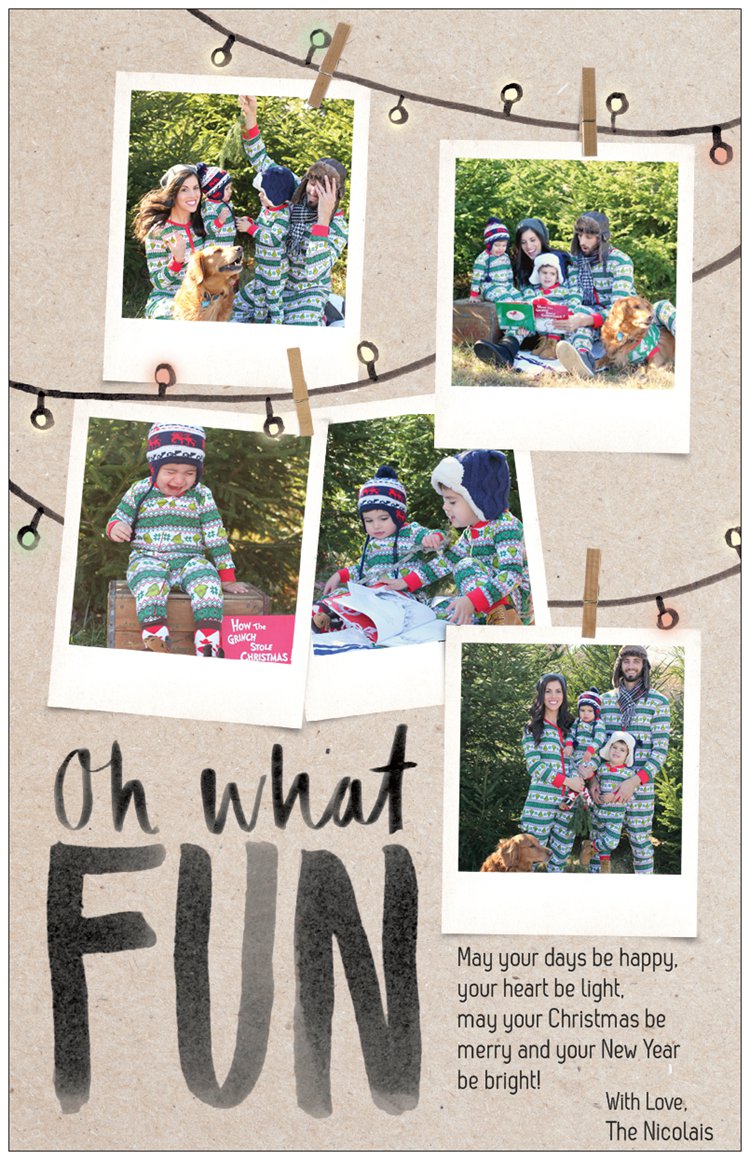