END_OF_DOCUMENT_TOKEN_TO_BE_REPLACED
Happy Friday, friends! You will always find me in a good mood on a Friday, because, well…Friday! This week was a little rough for us with little nugget teething and sleep wasn’t exactly on our side, but we worked through it and I think he finally found some relief.
With these unusually nice temperatures going on we soaked up all the fun we could get in which certainly gave us spring fever. We were spoiled the last few weekends with not having much going on and being able to relax. This weekend is basically the opposite and even though it will be busy, I’m really looking forward to it!

I am so excited that two of my best friends are coming up for brunch this weekend, we have a birthday party we’ll be going to with the nuggets, and my Mom and I will be trying our luck at a local tricky tray fundraiser tonight.

Here’s a look at some of my favorites from the week…
1. All the spring vibes: with so many of us experiencing these great temperatures I have a feeling the weather will be a favorite for a lot of us. I love when A’s little personality comes out and he is his cute goofy little self. I also kind of love that we were both sporting our mirrored sunnies (cheesy yes, but carry on). If you caught my favorites last week I was between two pairs of Quay sunglasses. After heading to Bloomingdale’s after work {these} looked so much better on me and I’ve pretty much been wearing them ever since.

After our fun outside we decided to head out to grab something to eat. I seriously think we tried some of the best hummus ever. It’s a good thing I don’t get my hands on this often because I really think I could eat it everyday. It was smoked hummus with garlic toasted homemade pita chips. Yes, please! Eric and I also split a meat sampler that did not disappoint. 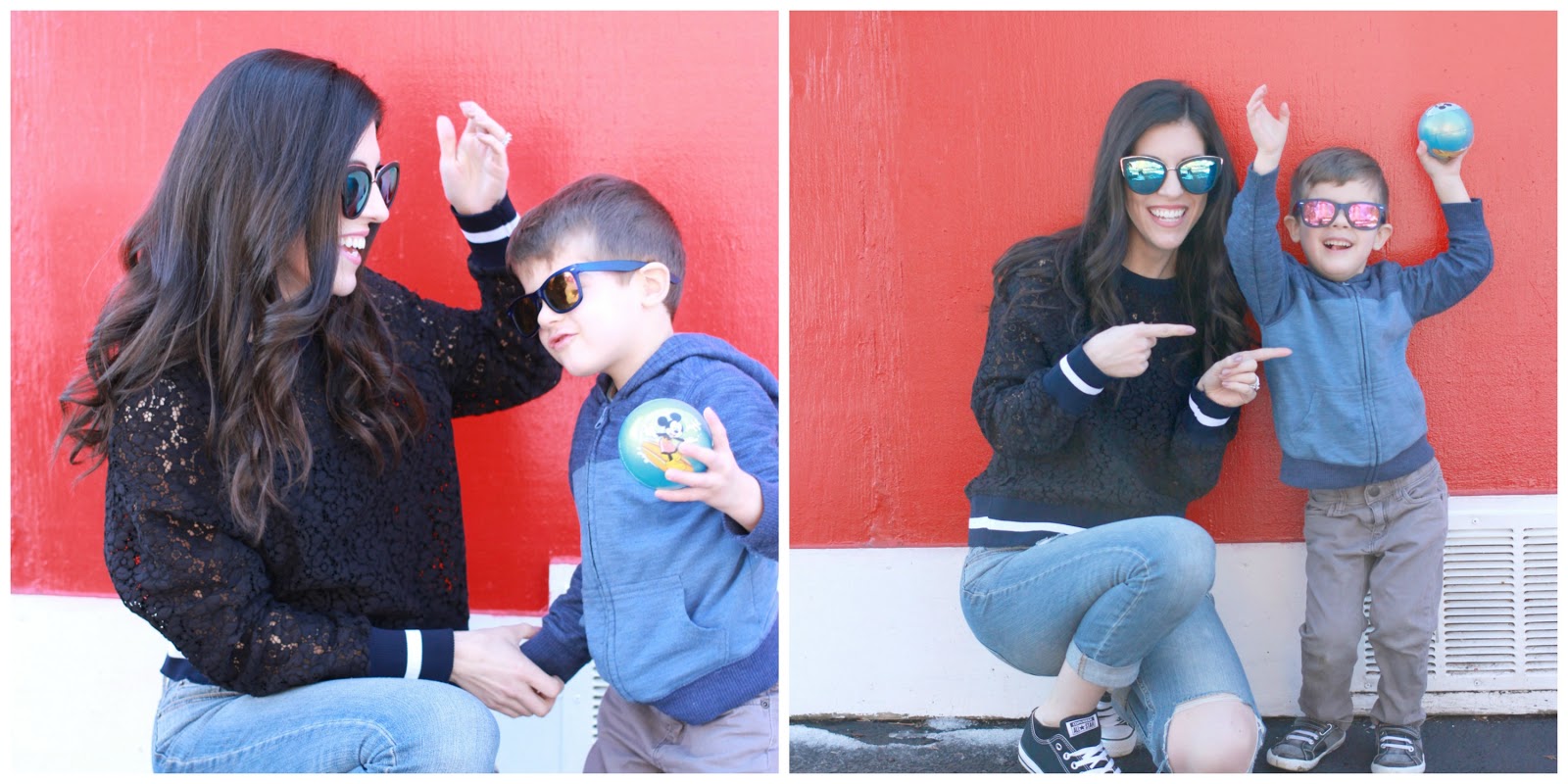 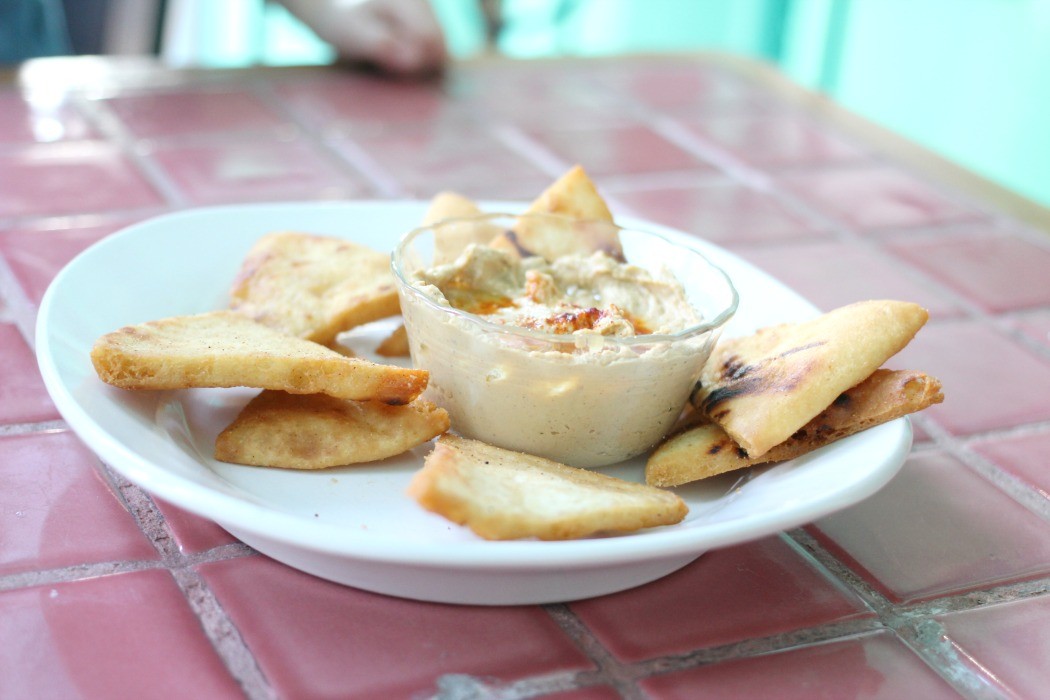 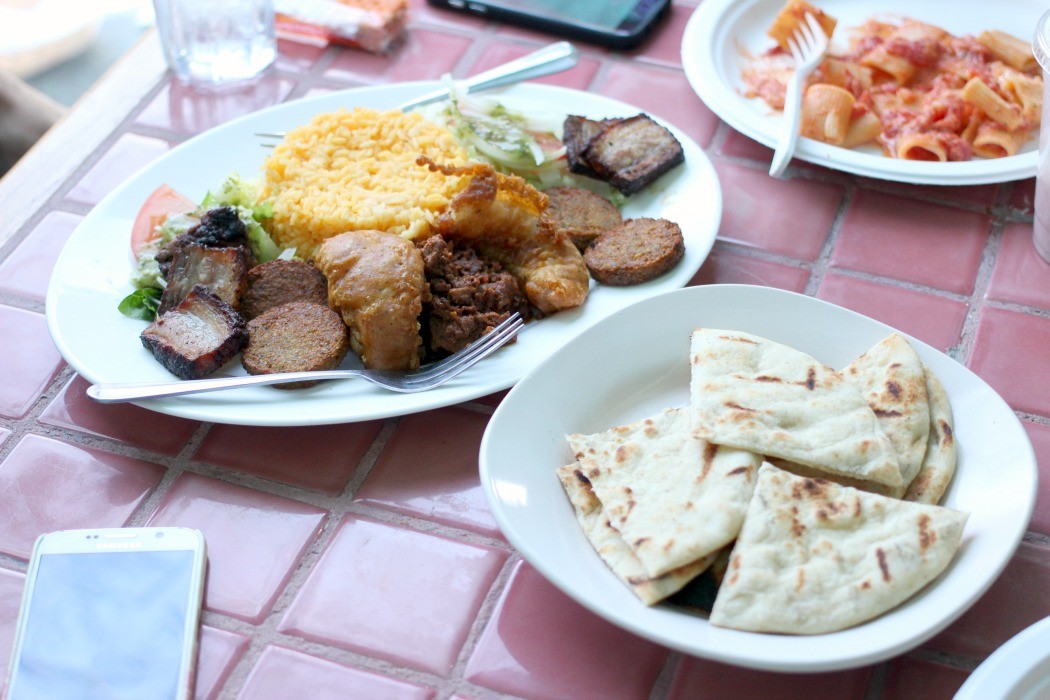 2. Harlem Globetrotters: We had tickets to take the nuggets to see the globetrotters and my mom decided to come along with us too, We enjoyed seeing them do all of their flips and tricks. At first we weren’t sure if the nuggets were too young for it but they happened to really enjoy it and little nugget was glued the whole time.
We tried to get a family picture once it ended but the nuggets wanted nothing to do with that #reallife. They were more interested in trying to get out on the court and run around. 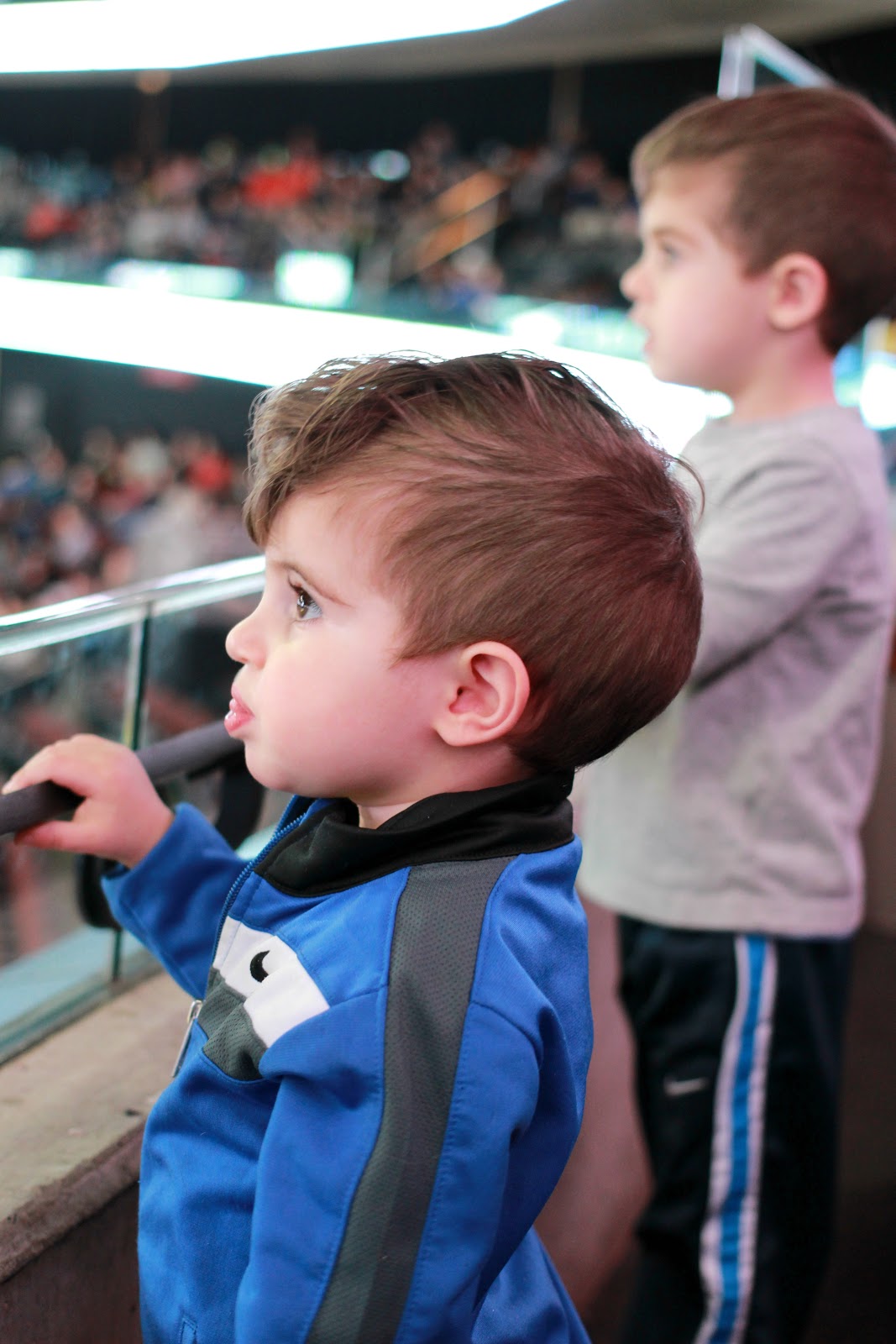 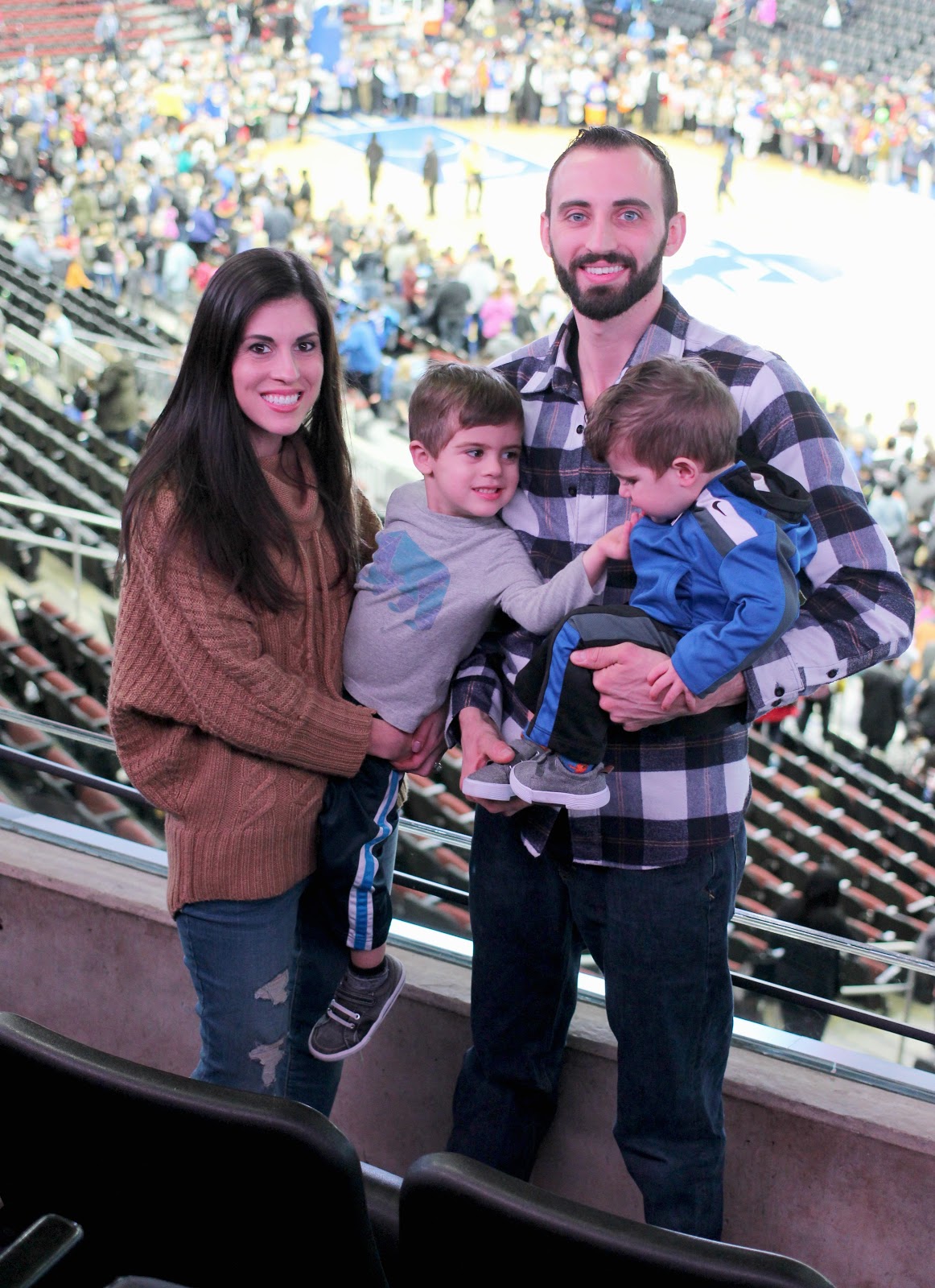 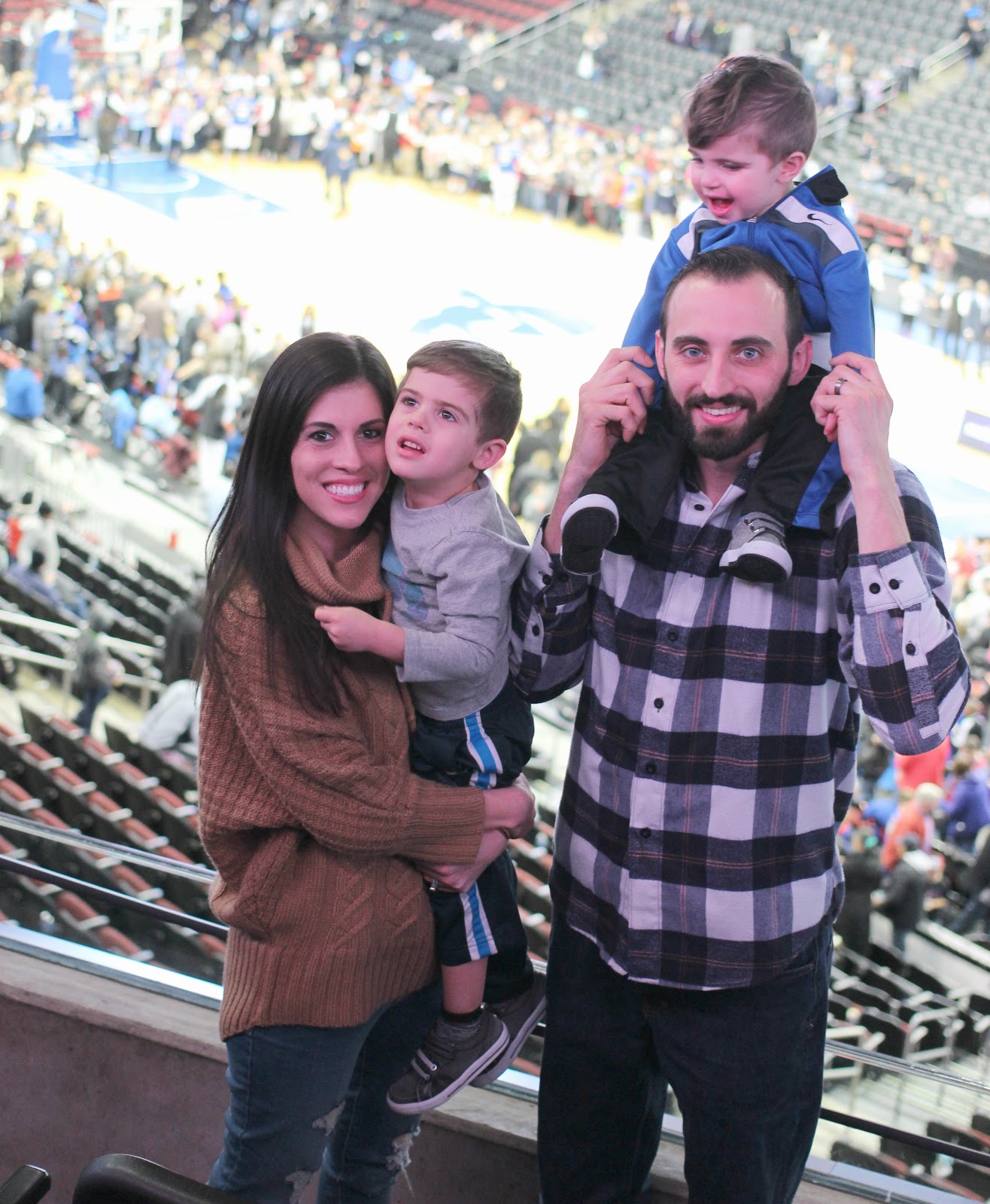 3. Park fun: with these awesome temperatures we had to fit in a few park visits. I think everyone else had the same idea because every park was sooo busy. The nuggets still managed to have a great time and let out tons of energy. That’s a win for me! A’s new thing is climbing trees. Lord help me. And, wanting to jump out of them. 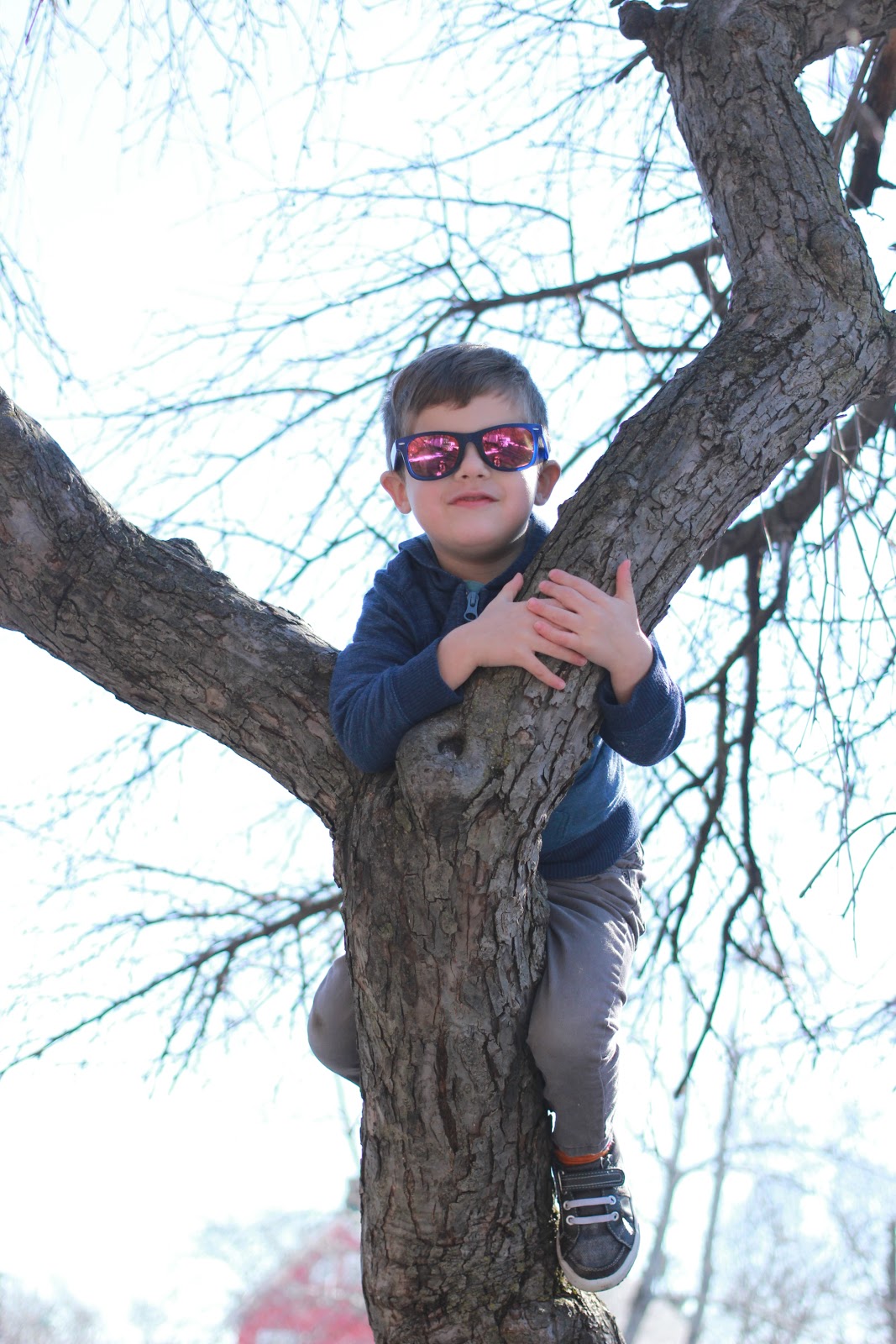 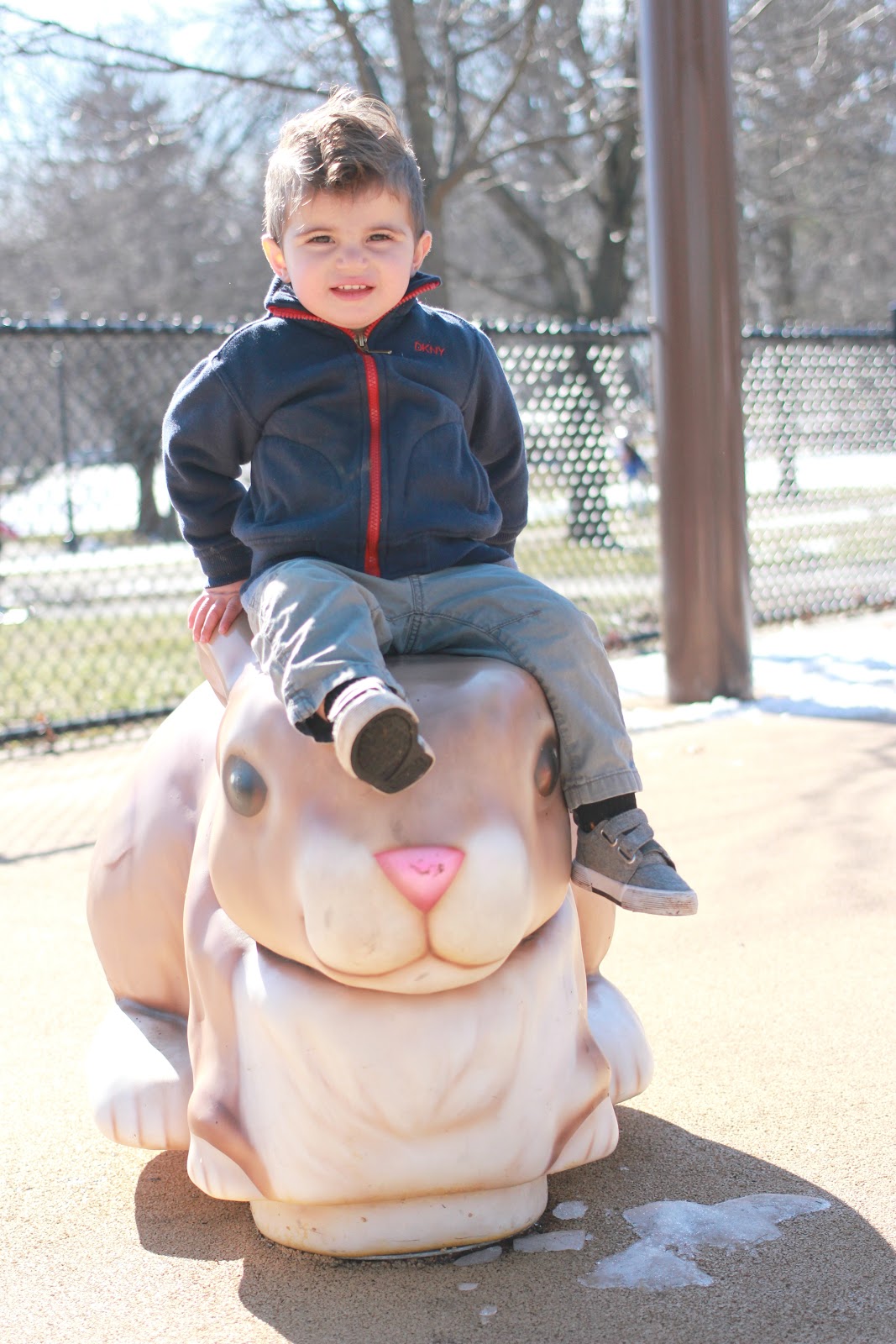 4. Lake visit: we thought about taking a drive down the shore over the weekend since it was so nice, but knowing it would probably be windy and a little cooler down there we decided against it. I mean, our temperatures were in the 60’s so it wasn’t exactly beach weather. I think all of us were just a little overly excited about this happening in February.
We decided to take a drive to a local lake which ended up being a nice compromise. All things dirt, sticks, and climbing on rocks made for one fun afternoon for them. Eric has always thrown the boys around since they were little (don’t get all crazy now we aren’t talking like newborn status here) and they just can’t get enough of it. He could do it 20 plus times and they will always say, more, more, more. I was happy to capture this fun moment of him and little nugget. 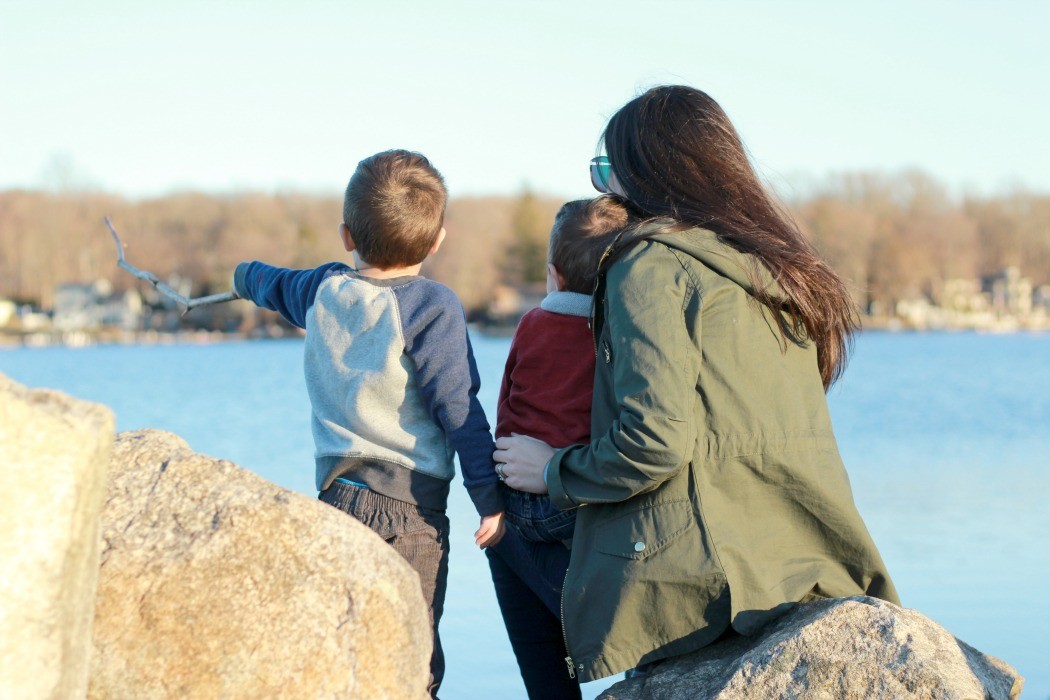 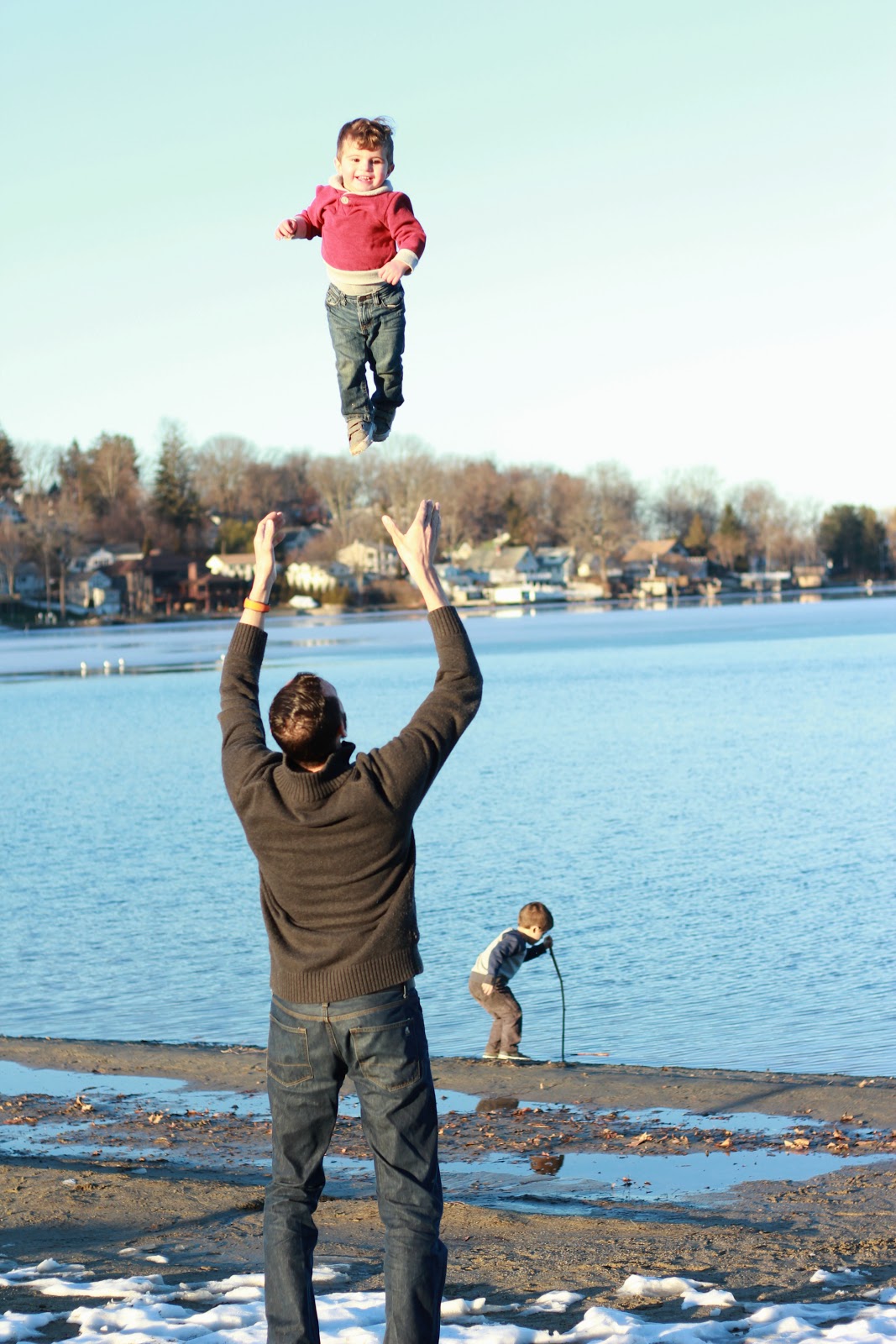 5. Painting party: I’ve always wanted to go to one of these paint nights but it’s never worked out. One of my good friends was celebrating a birthday so we thought it would be fun to organize a girls night to celebrate her. I don’t consider myself very artistic and my poor kids have a hard time recognizing my stick figures, but this was a lot of fun and something I would definitely do again. 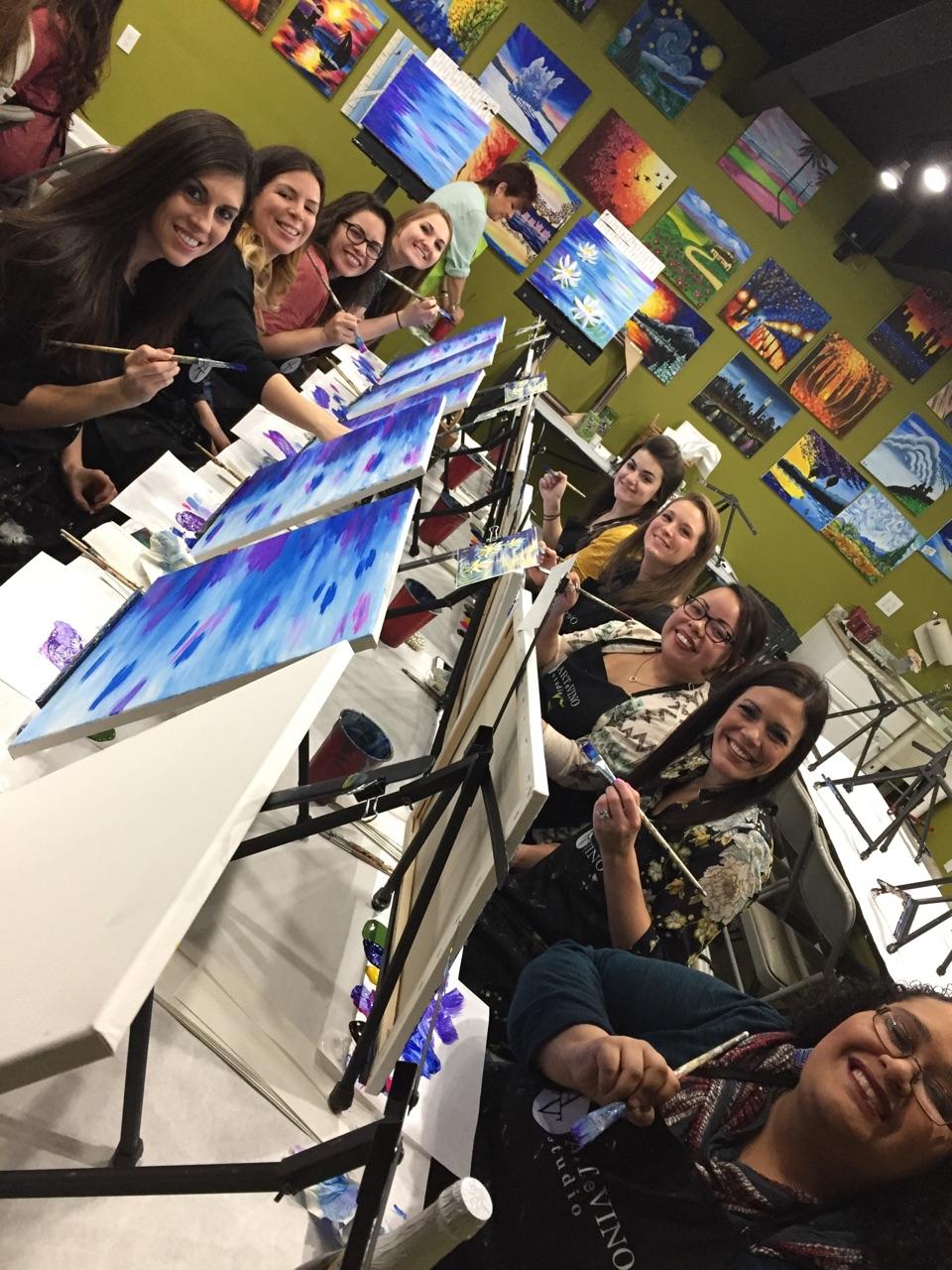 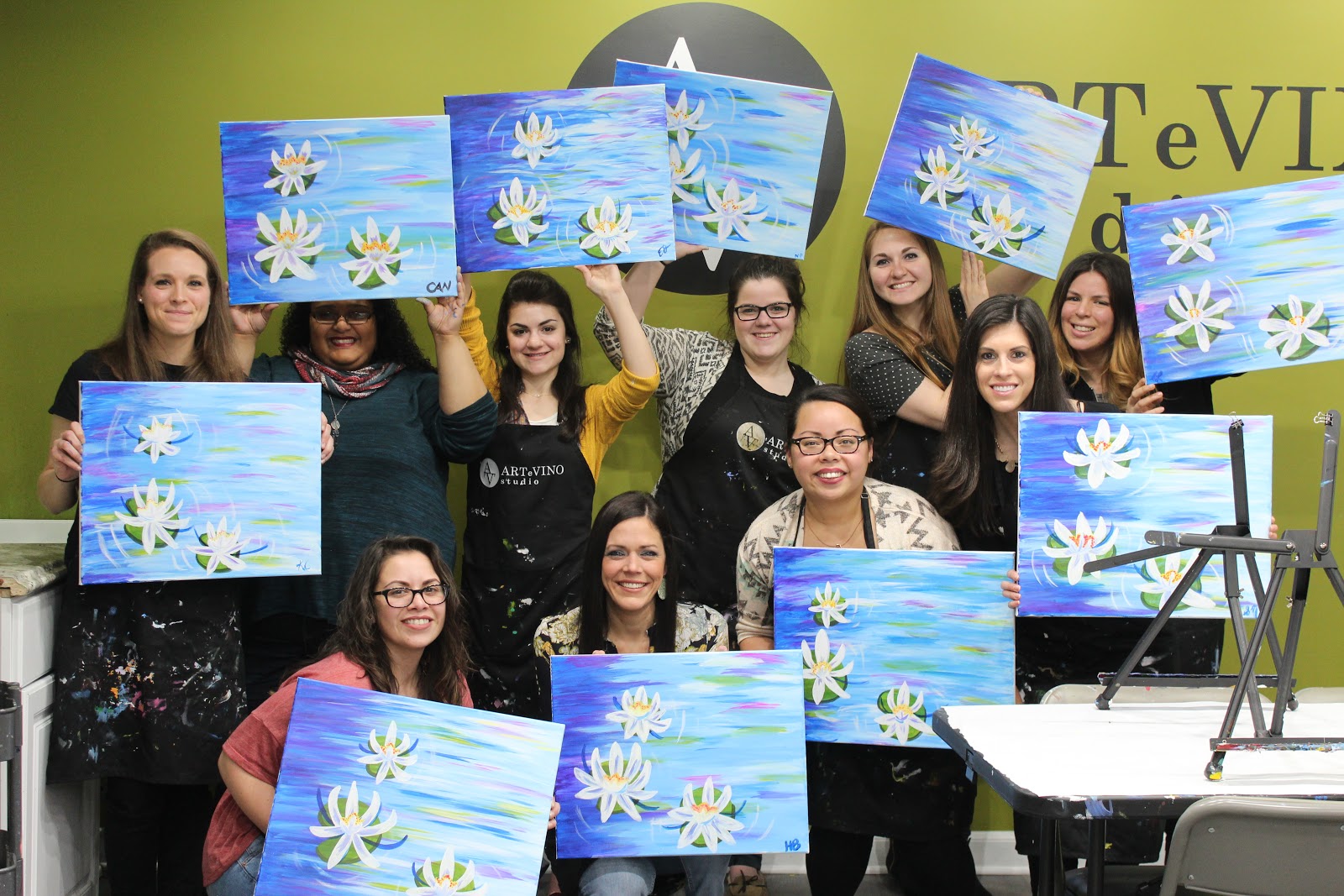 I hope everyone has a great weekend! Here’s where I’m linking today and throughout the week for all the linkup fun.