END_OF_DOCUMENT_TOKEN_TO_BE_REPLACED

Fall sure greeted us with a big welcome this weekend. The temperature was perfect, there was a crisp breeze to the air, and you could see some leaves starting to fall from the trees. They haven’t really changed colors yet but that usually doesn’t happen for a few more weeks.

If you remember from my favorites, I mentioned how my sister and I went fishing with our brother out in Chicago. Ever since my boys saw a picture of me with a fish they have been pouting around the house saying how it wasn’t fair I got to go fishing with uncle Evan and not them. 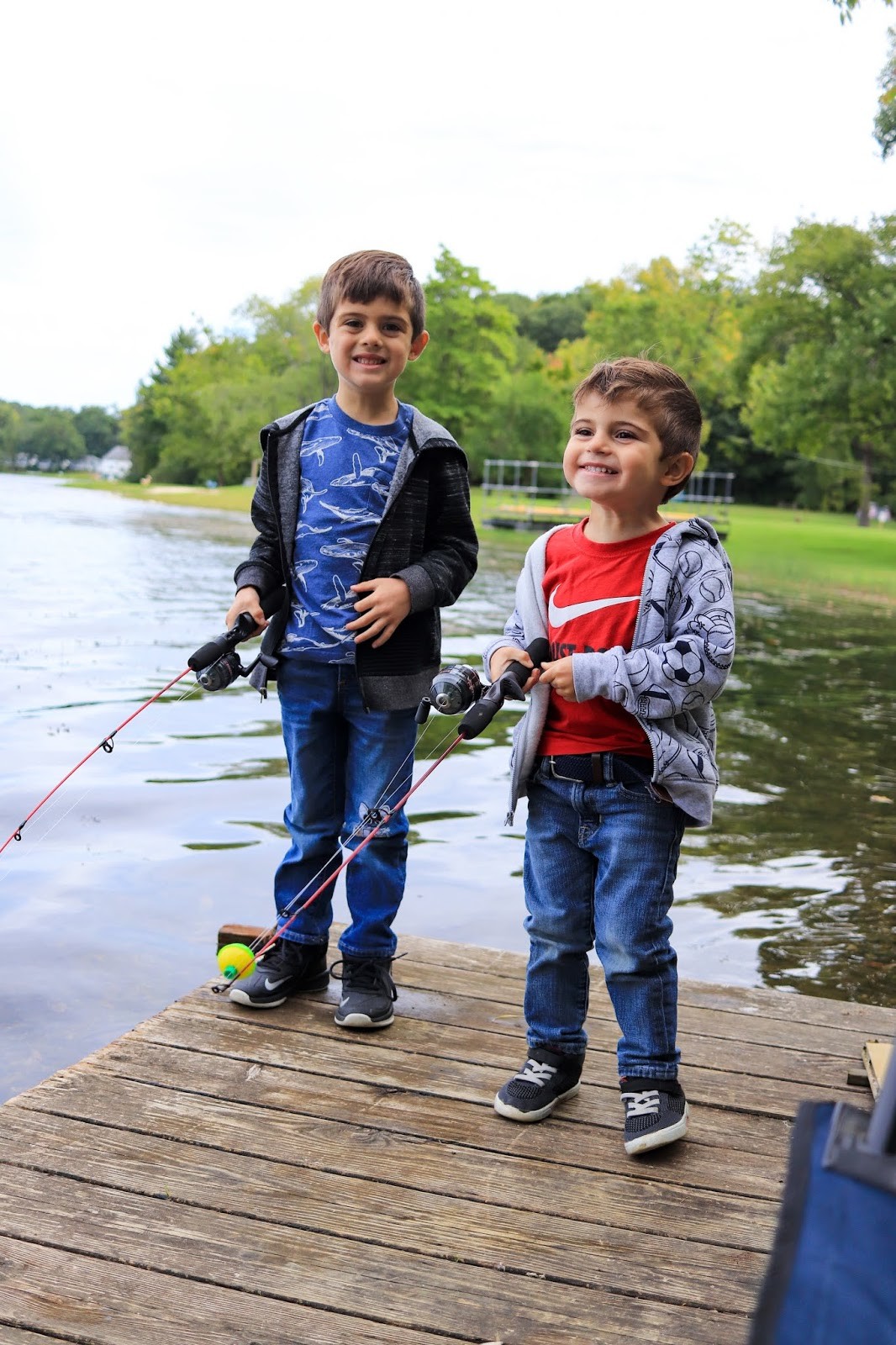 Eric and I were up for another Airstream adventure, which I still have to reveal our renovation. Ugh, I feel so crunched for time lately that I will be lucky if I get those posts together before the end of the year. They will be coming at some point, I promise. If you’re ever looking for a sneak peek I usually share more from our Airstream on my insta stories. Anyway, we found a campsite in NY state that was only about an hour away from us, that sat near Sylvan Lake. It was a great location for us because it was also only about 35 minutes from the Elephant’s Trunk in Connecticut which we’ve been wanting to visit for the longest time. I will also share more about our time at the flea market. Any Flea Market flip watchers? If so, then you know exactly what I’m talking about. 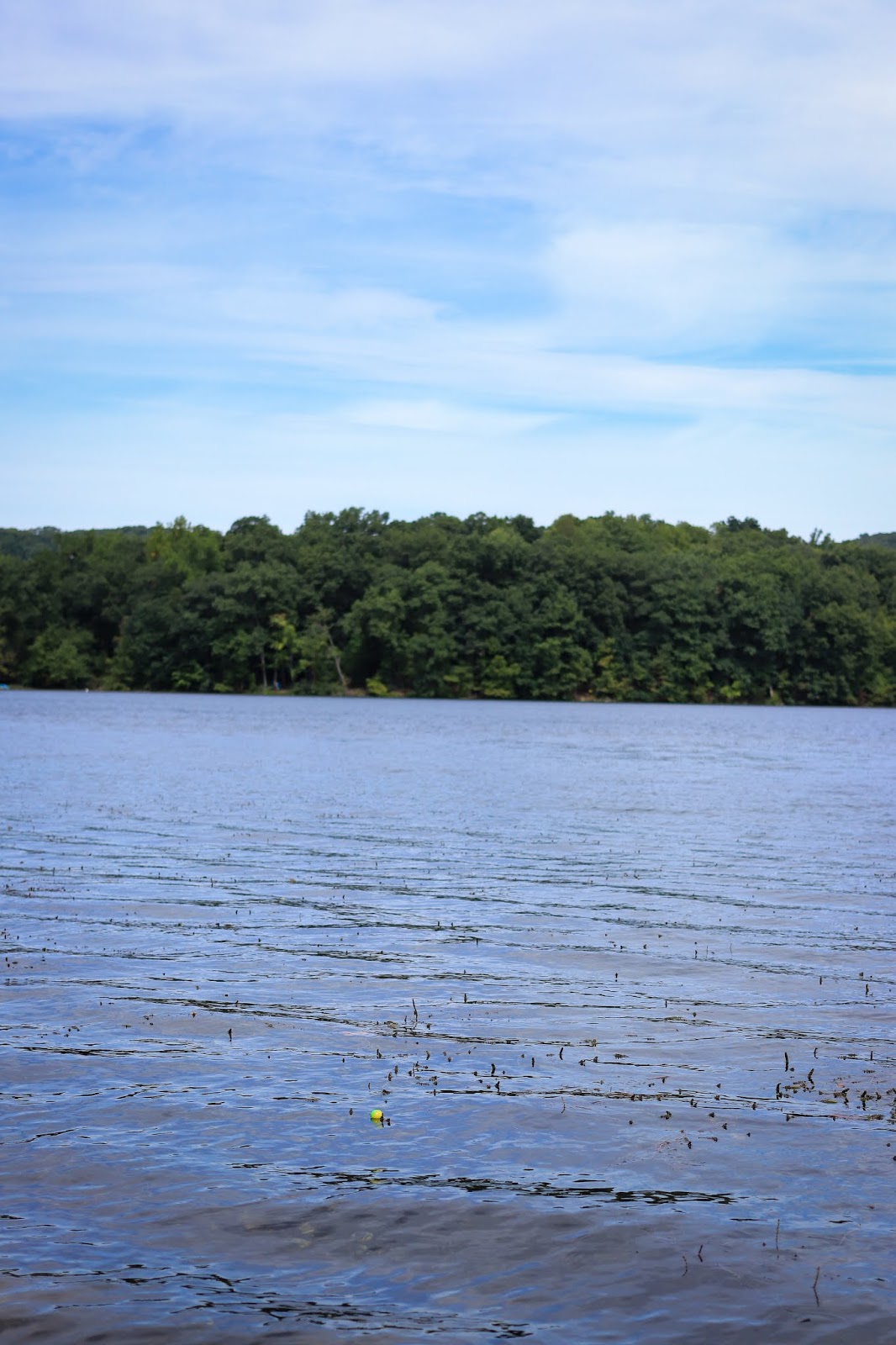 We woke the boys up the next day and surprised them with letting them know we were going camping and they were going to get to go fishing. They were so happy to find out Eric went out and got them their own poles. They couldn’t wait to dig around in the backyard to find some worms to bring along, and sure enough they found some. We were off on our way and before we knew it, we pulled our Road Toad into our camping spot. It happened to be a great spot by the way. I love campsites that offer a map and allow you to pick the lot number where you want to park ahead of time. It was roomy, there was gravel so we didn’t have to worry about mud and dirt, and it came standard with full hook-ups. From there, all we had to do was walk down the path right to the lake. 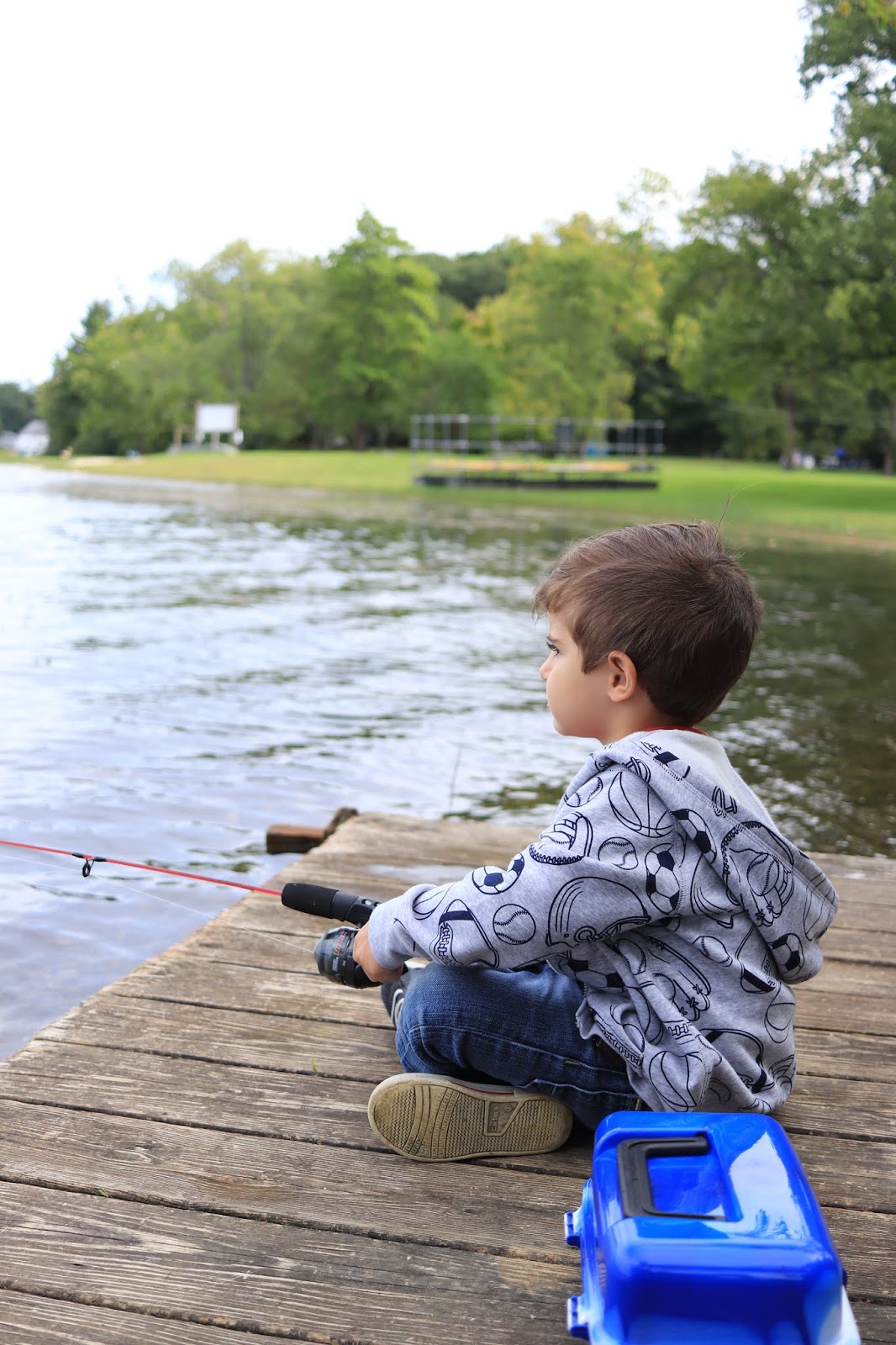 We found our away to a dock and the boys were anxious to set out their first cast. After we realized there was a lot of vegetation growing under the water, we decided to move our spot because the hooks kept getting caught. We hopped in the car to head to another spot around the opposite side of the lake. It was an ideal spot that must be used for swimming in the summer but since it’s after labor day no swimming was allowed. 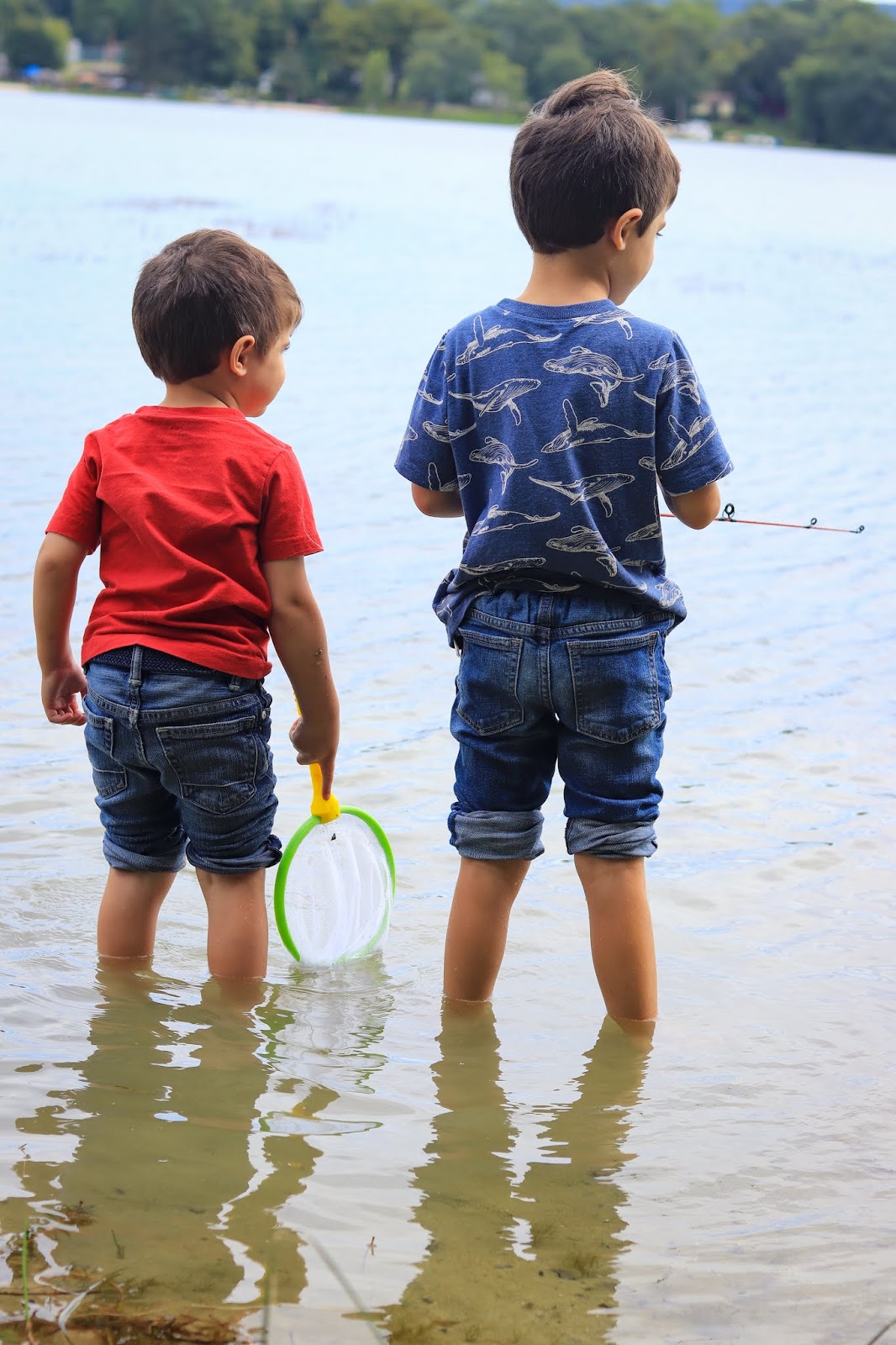 We set up our chairs and the boys wanted to take their shoes off to stand in the water to fish. I thought it was the cutest thing, so we rolled up their pants and let them splash in. After about a half an hour or so A caught his first fish. He was so excited and I couldn’t help my voice from getting all high pitched cheering him on as he reeled it in and telling him over and over again that he did so good. We caught it on video but decided to keep those as private moments for us. 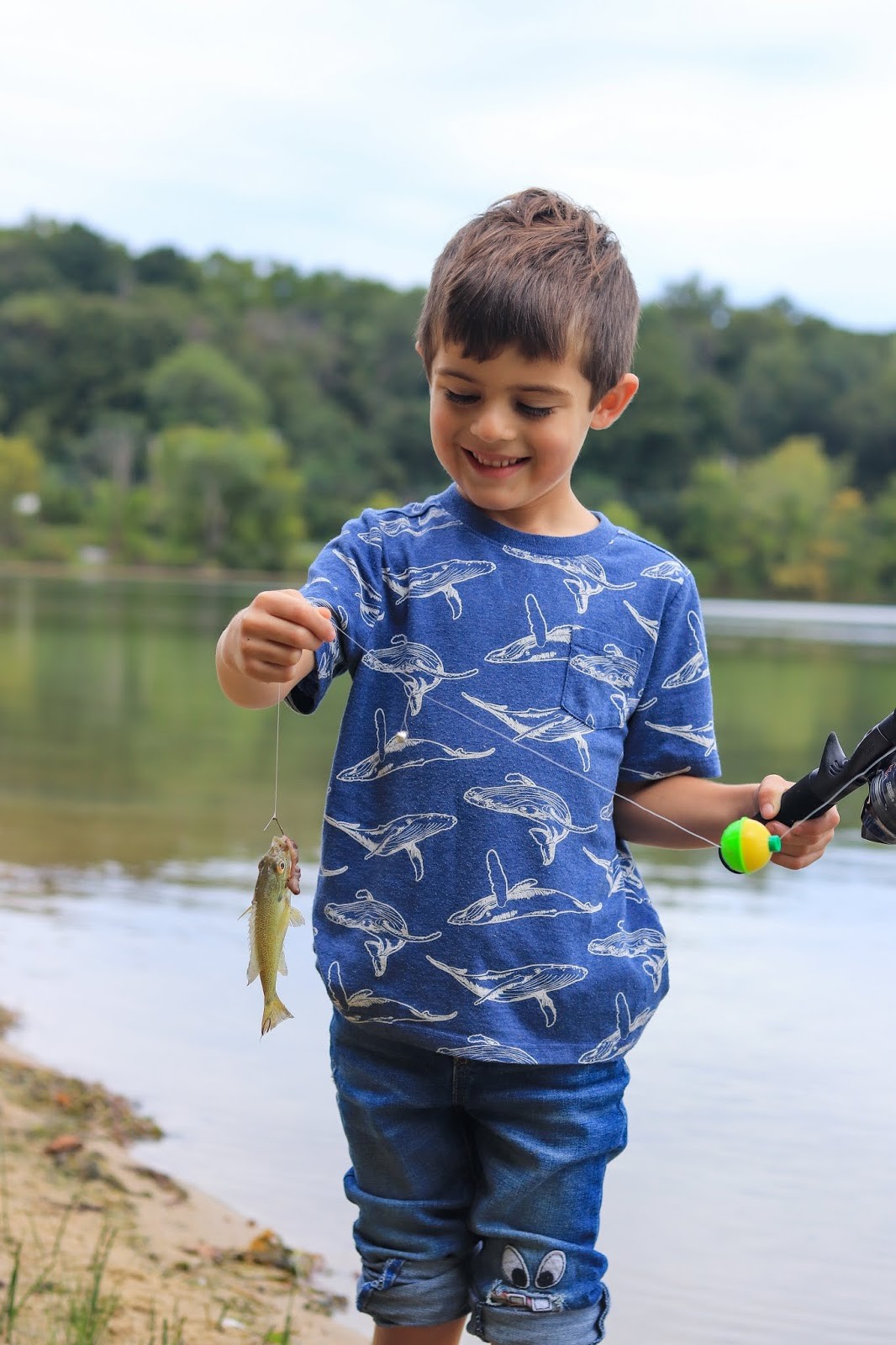 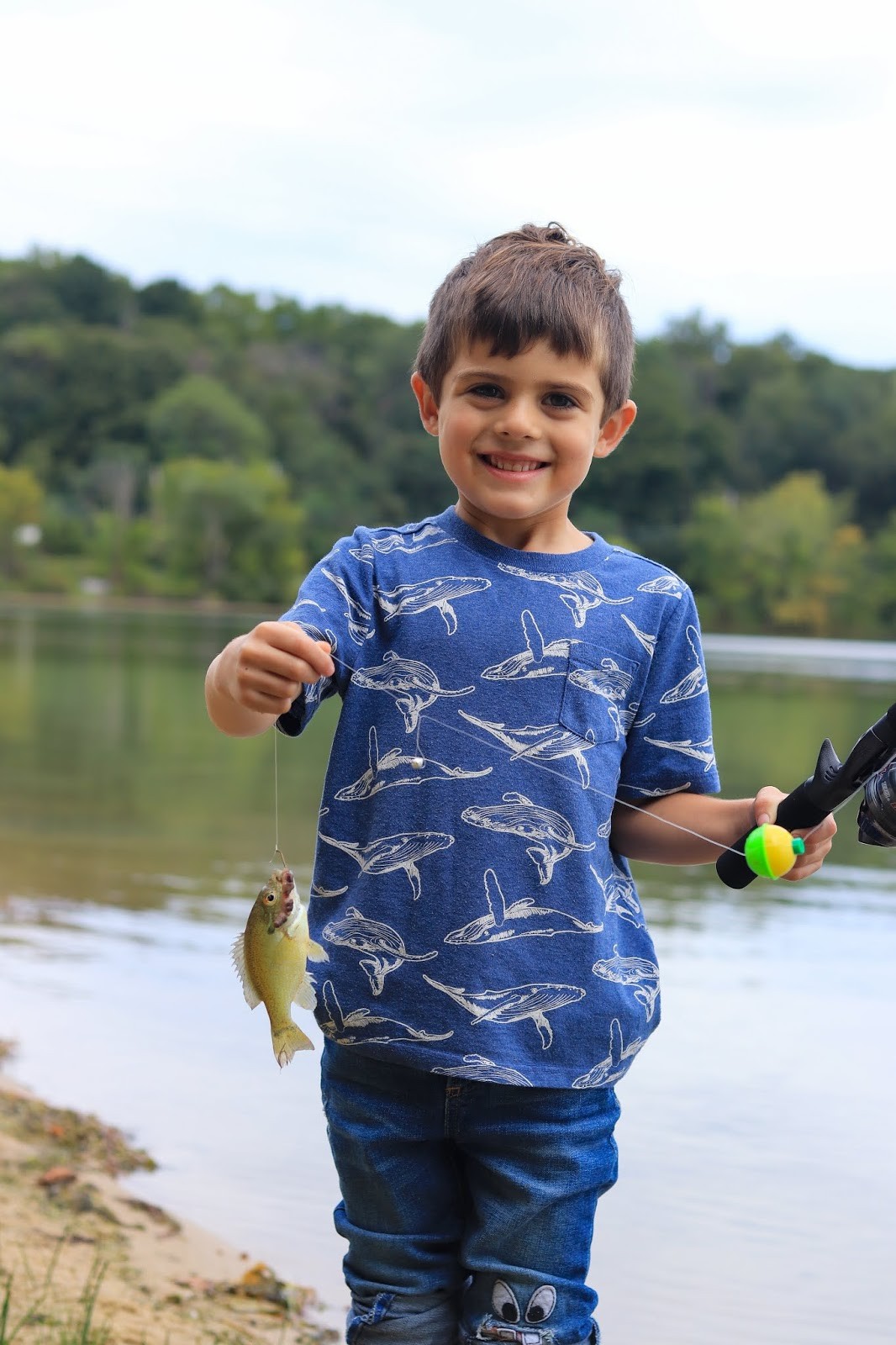 I was worried that little nugget was going to be upset that he didn’t catch anything yet but he was a great sport about it. He might have been more fascinated by finding rocks and throwing them in the water then really sitting patiently to fish. After a little while he did hook one and I helped him reel it in. They were both so happy they caught one and I was relieved they both got one. 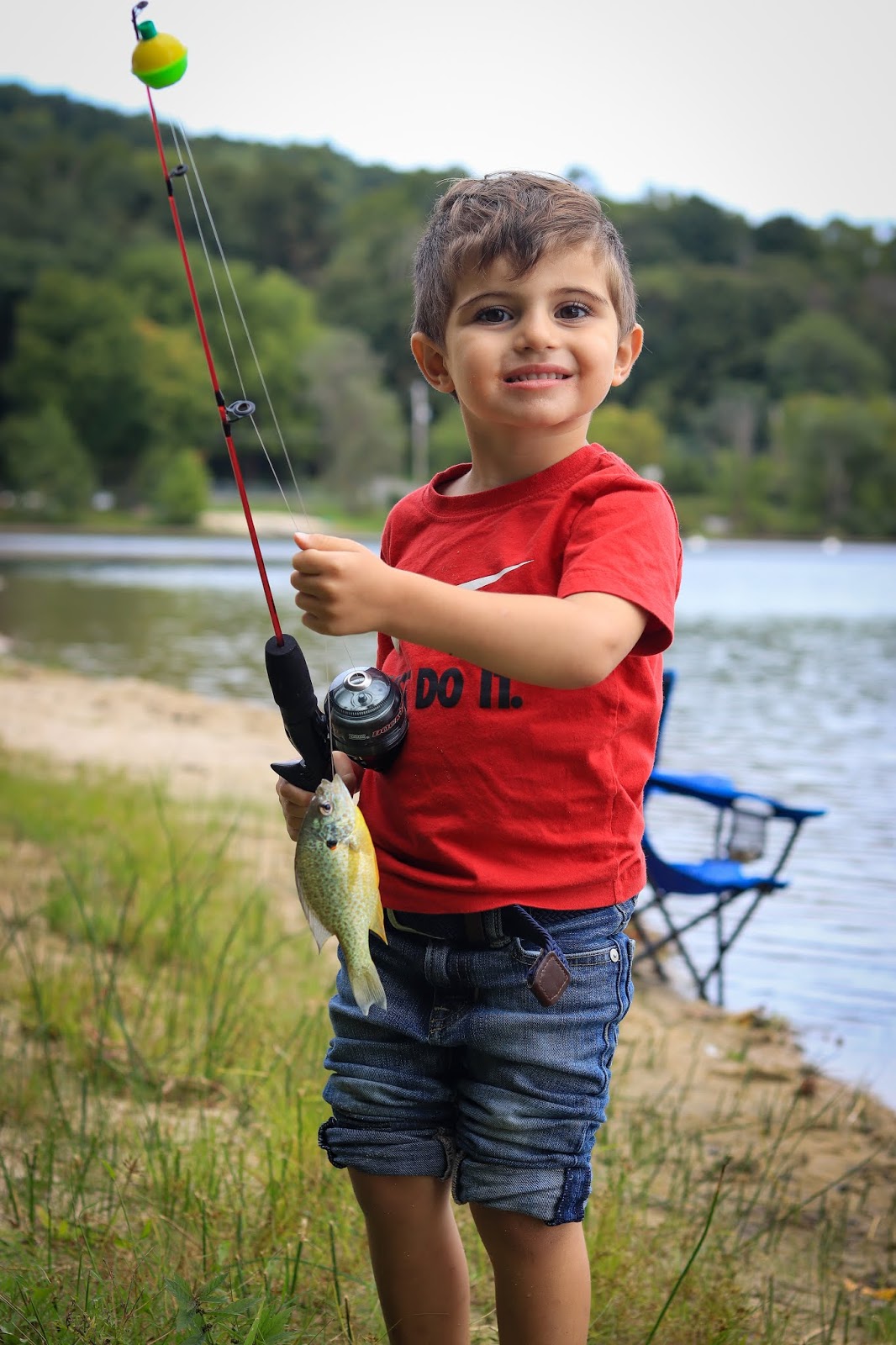 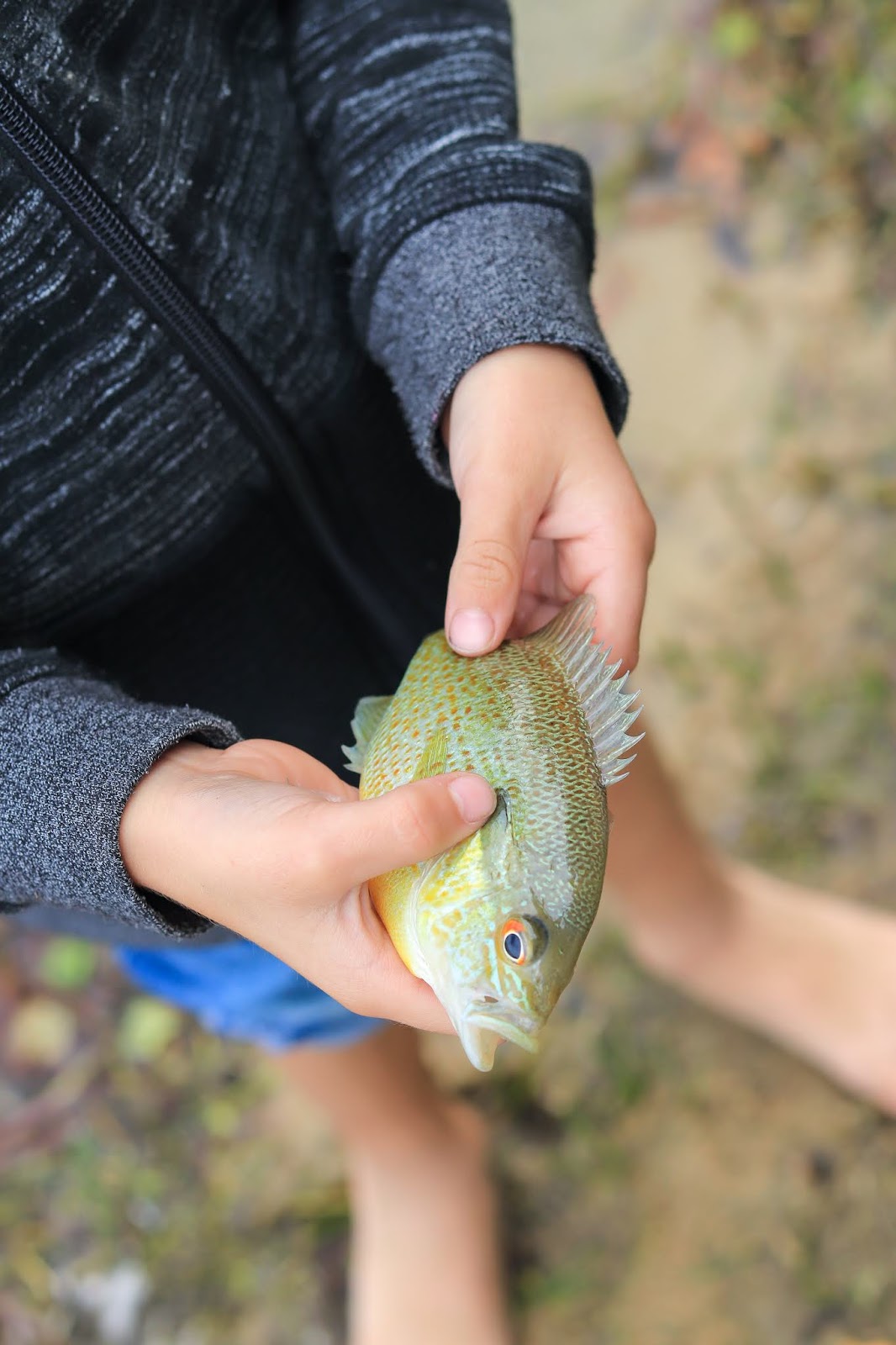 We ordered food and brought it down to our spot for a little picnic by the lake. A thought it would be funny to see if the fish liked pizza crust instead of using the worms for bait. We thought it sounded silly at first but I’m always up for exploring his creativity, so we hooked up a chunk of pizza crust. I kid you not, within not even 2 minutes he had another fish and it looked like pizza crust was a hit. Little nugget wanted to tried it out and sure enough he got another one too. I guess he was onto something from the start 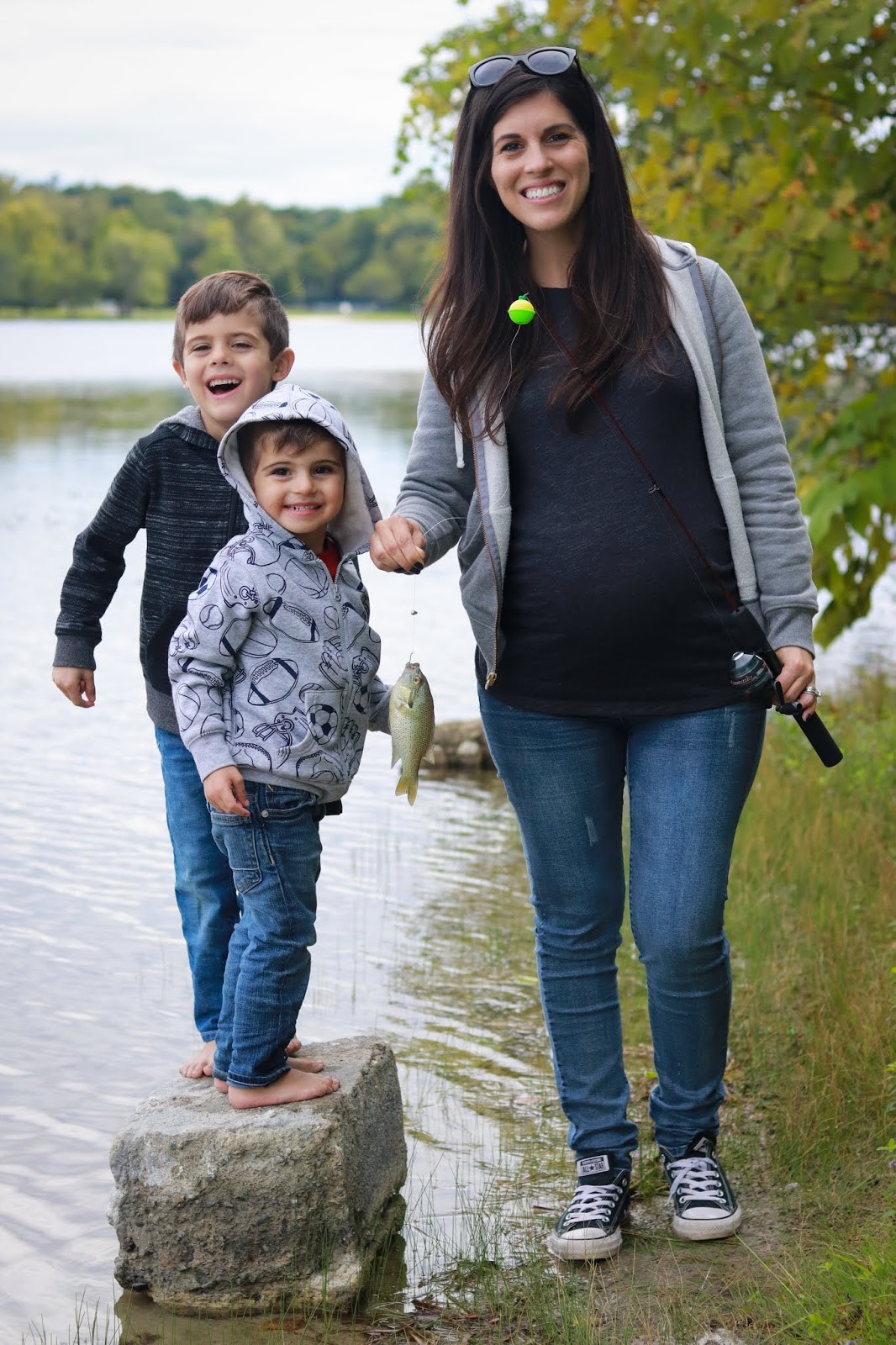 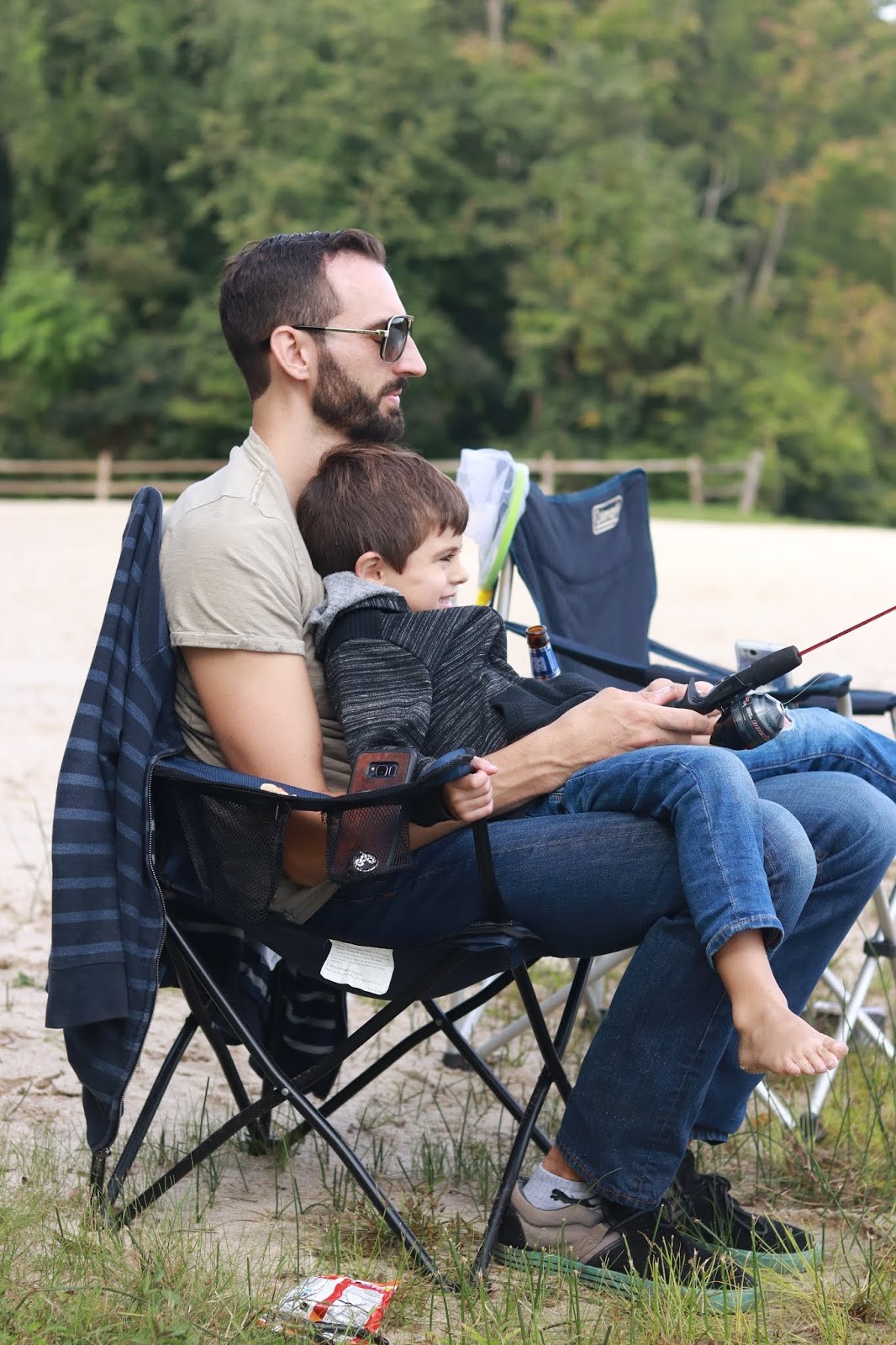 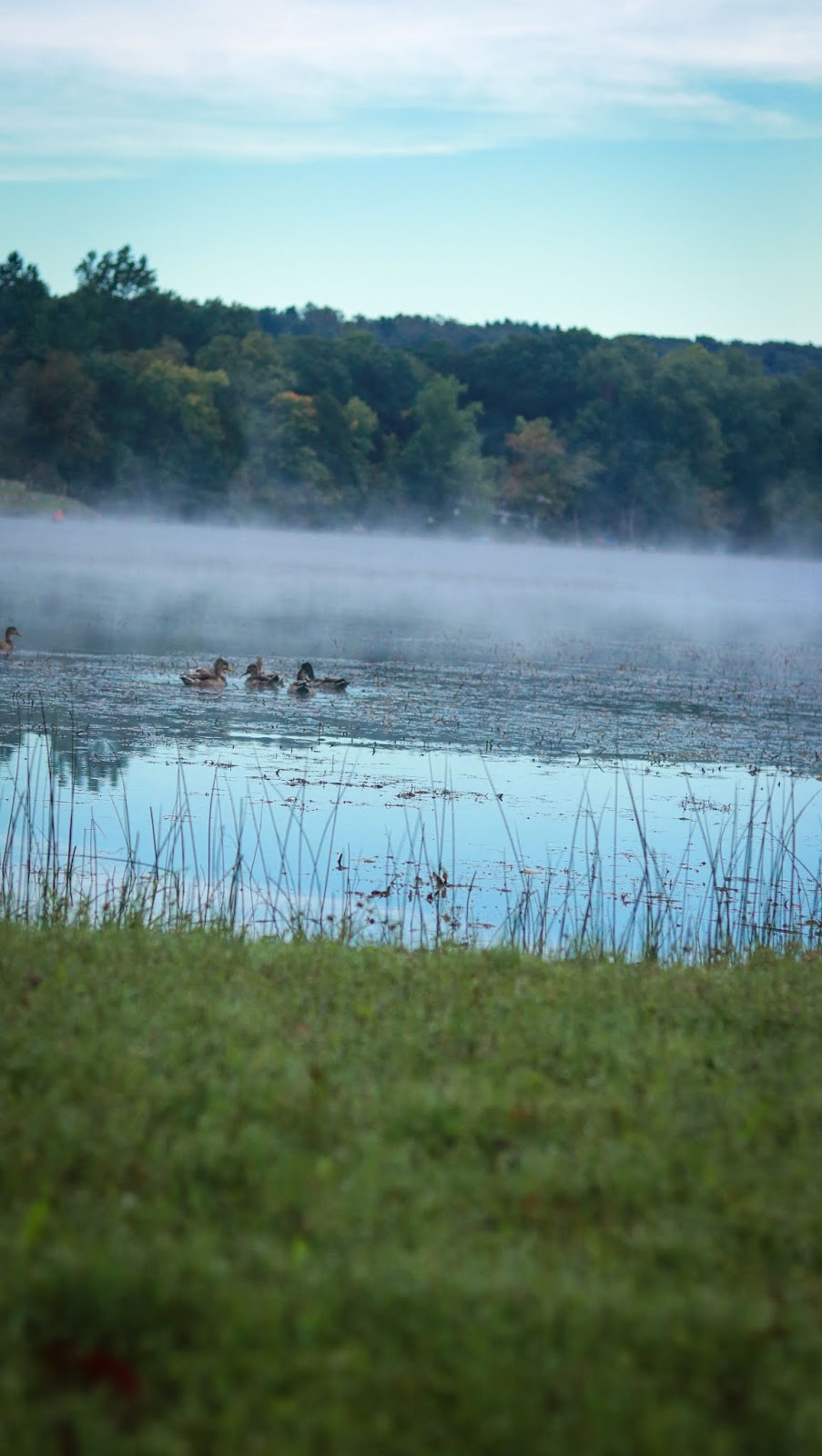 We ended up with a total of four fish for the day. The best part in all of it was seeing how excited the boys were and how much they enjoyed being out by the water. Neither of them were scared to pick up the fish and were extra gentle with them. They were so sweet when it was time to set them back in the water and would say, by fishy, go find your friends. The next morning on our way out to the flea market we walked past the lake and saw a thick fog coming off of it. Even though it created a bit of an eerie feeling it was still a pretty sight to see and a nice place to kick off some fishing memories with the boys.