END_OF_DOCUMENT_TOKEN_TO_BE_REPLACED

We’re off to see the…and just like that, halloween has come and gone. Most of you know that we love a fun family halloween costume, so this year was no different. In fact, I’ve had this family costume idea since I knew I was having a third boy. For real though, you can confirm that with my husband.

That might sound really silly, and probably not something I’m proud to admit, but we do have a list of family halloween costume ideas that hopefully we can get through over the years. I mentioned in my flashback costume looks that if the boys have a school event or party they can pick whatever they want to be. Although we keep it to family fun, nothing scary or off the wall in our book. But on Halloween, our costumes usually make more sense when we’re all together.

When I shared three hints on my insta stories about our family costumes were for this year, only eight of you hit the nail on the head. I don’t know if that’s a good thing or a bad thing. Most were my fellow Wizard of Oz fans or those that knew it was my favorite movie. There were some good guesses though.

We could have gone with some of the more traditional Wizard of Oz characters, but with my three little guys, I thought it would be fun to have them be the lollipop guild. It’s a very small part in the beginning of the movie, but they’ve always fascinated me and it made sense for us.

Eric and I purchased our costumes (scarecrow here, dorothy here, and ruby red slippers here), but we decided to do a little DIY on the boys costumes. We found one option for them online but it was a generic munchkin costume that wasn’t cutting it for us. We found these munchkin shoes and striped socks for them. These giant styrofoam lollipops topped off their look and we dressed them up with clear wrapping and extra ribbon.

And just like that, our costumes came together. After several days of rain, we got really lucky to see the sun again just in time for some treating. We headed to my sister’s who was having our family over and a few friends. Her neighborhood did such a great job with keeping things safe and coming up with creative ways for contactless treating.

My sister and her husband had the best idea! They created a slingshot that catapulted the candy to the kids as they tried to catch the flying treats in the air. We all had so much fun and enjoyed way too many treats. That’s half the fun of it though, right?

Were you able to go trick or treating? Did you come across any creative ways that people came up with to give out candy this year? 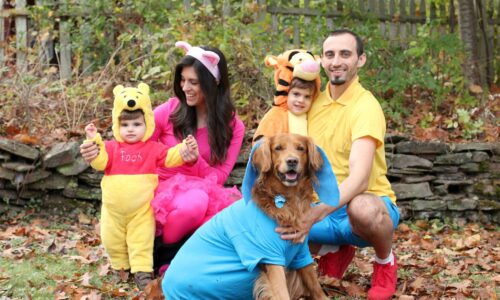 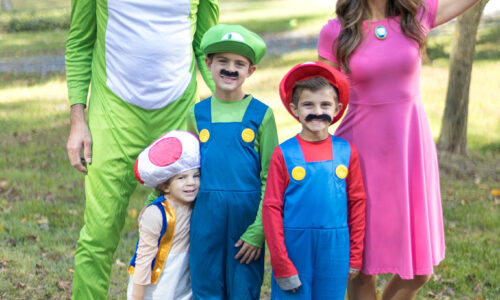